Hasan Kaymak is preparing another one of his cool HTC renders, this time involving a smartwatch in the mix. He calls it the HTC Watch 2014 and for now we get two teaser pictures posted on the designer’s Google+ page.

These are preliminary designs, so I suspect the HTC Watch will be made smaller in the end, in case you’re wondering why it’s so big. I can see it has a circular format, a pretty wide belt and an interesting player that seems borrowed from HTC Sense back in the days when the Beats partnership was a thing. 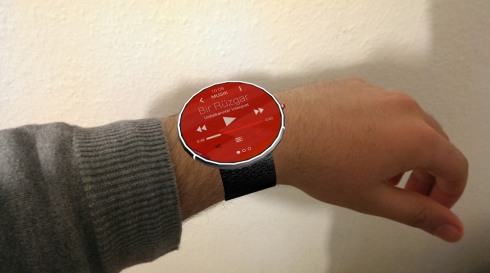 Judging by the recent design trends, HTC would probably use an aluminum unibody design here, as well as a carbon fiber belt, or maybe rubber or who knows what other material. From what I can see this HTC Watch concept is pretty minimalistic and there aren’t many extras here. This looks more like a media device than a companion unit and certainly it has a more premium vibe rather than a sporty one.

About Kelvin
Passionate about design, especially smartphones, gadgets and tablets. Blogging on this site since 2008 and discovering prototypes and trends before bigshot companies sometimes
Sony Xperia N is a Midrange Smartphone With KitKat on Board   Hologram iPhone Concept is Something We Missed (Video)