After the Samsung Galaxy S4, the Nexus 5 is the most rendered phone in 2013, I’ll give you that much. Each and every designer is having a go, putting brands like LG, HTC, Sony, Samsung or others attached to the Nexus 5 project. Today Suman Chatterjee gives this idea a spin and created the new Nexus by HTC. 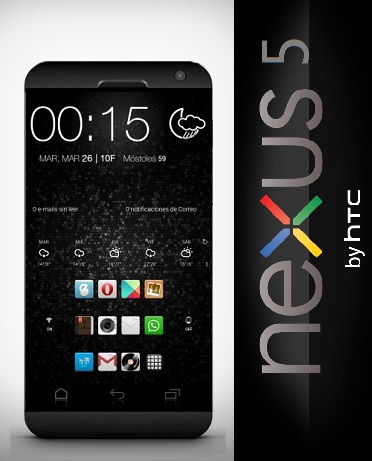 The result is a 4.9 inch Full HD smartphone with a Snapdragon 800 quad core 2.3 GHz processor and Android Key Lime Pie as the OS. Nexus 5 has 3 GB of RAM, 32/64 GB of storage, a 16 megapixel camera with autofocus and a 3 megapixel front camera. We’ve also got a Li-Polymer battery, that’s removable and offers a 2800 mAh capacity.

The design seems greatly inspired by the HTC, although the two capacity buttons are replaced by 2 virtual ones and there’s an interesting app selection in the middle of the screen. The display also seems to have even smaller bezels than on the HTC One…