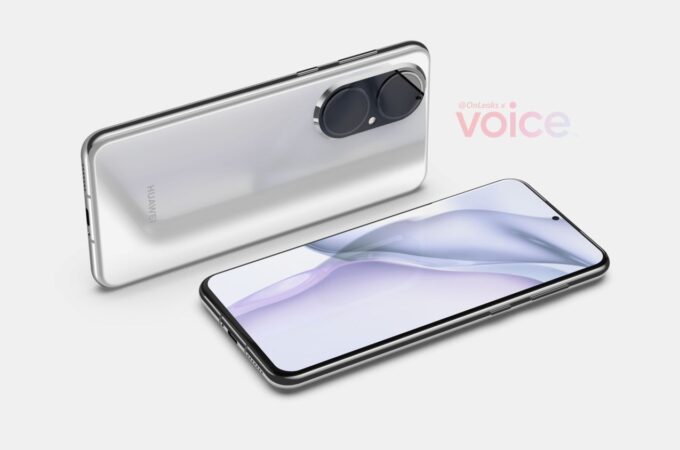 Huawei P50 Pro stunned everybody a few days ago, when it leaked with a gigantic camera module at the back side. It was shaped in the figure of “8”, as revealed by @OnLeaks/ Steve Hemmerstoffer via the Voice.com site. Now the same source unveils the design of the Huawei P50, as seen below.

These are brand new CAD renders from Steve Hemmerstoffer and luckily we get to see the Huawei P50 on a white background this time and also in a silver version. The P50 Pro leak was all dark and not very clear, I actually had to turn up the brightness a little bit. Seen from the front, the Huawei P50 is clearly different from the Pro, as it doesn’t have curved edges, opting instead for a flat panel. It does look similar at the back though, with the same two huge lenses.

The facade also seems a bit like the one of a Galaxy S21. The newcomer is said to feature a rear glass panel and a metallic frame, probably made of aluminum. Leaked measurements are 156.7 x 74 x 8.3 mm and the waistline bumps up to 10.6 mm with the rear camera module. We also get an IR blaster at the top, two stereo speakers, top and bottom, which is good news, since the P40 Pro and P30 Pro didn’t have them. The diagonal is small by today’s standards, at 6.3 inches and the P50 Pro was no giant either, at 6.6 inches.

We also learn that The device will have an industry first 1 inch Sony IMX800 sensor and that it’ll use the same Kirin 9000 flagship CPU as the Mate 40 Pro. It should also run HarmonyOS out of the box, when it debuts on April 17th. That’s the launch date in China, but we may see a global event earlier.

About Kelvin
Passionate about design, especially smartphones, gadgets and tablets. Blogging on this site since 2008 and discovering prototypes and trends before bigshot companies sometimes
iPhone 13 Pro Gets New Concept Without Port and With 120 Hz Screen (7 Colors)   Track Temperature Data On Your Smartphone With The SensorPush