I remember that in the early days of our website, we had some stunning Kyocera concept phones shown here and I never stray away from covering their work. Today we’ve found the brand new Kyocera Duo smartwatch concept, shown below. This is more of a prototype, one that was shown at CEATEC 2014. 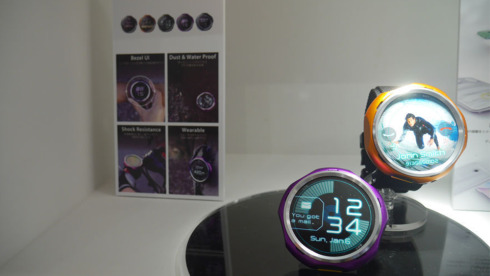 The screen of the watch is incredibly crisp, maybe because it uses some new technology like IGZO panels, but I’m just guessing here. IGZO would make sense, because it uses less power and offers great brightness. Kyocera’s brand is famous for resilient handsets, that can withstand drops from high up. They’re also waterproof, as far as I Know. Anyway, these watches are either a tad big, or photographed from really close.

During CEATEC Kyocera showed off prototypes behind a plexi case, so there was no touching. The watches were purple and orange and had a design similar to the LG G Watch R and Moto 360. The bezels are thin and apparently you can rotate them to navigate around the UI. This Kyocera Duo smartwatch is dust and waterproof, but also shock resistant. It can also be mounted on bikes and such and it comes with a GPS, accelerometer and many fitness and health sensors.

The gadget could hit the market early next year.