As you know, the entire Internet is flooded with leaked pictures and specs of the upcoming LG Optimus Nexus phone aka the Mako aka the LG Nexus 4. Codenamed E960, this model is actually a brother of the LG Optimus G model, with some slight modifications. Taking all of the leaked photos into account, Bob Freking created the following “press” picture: 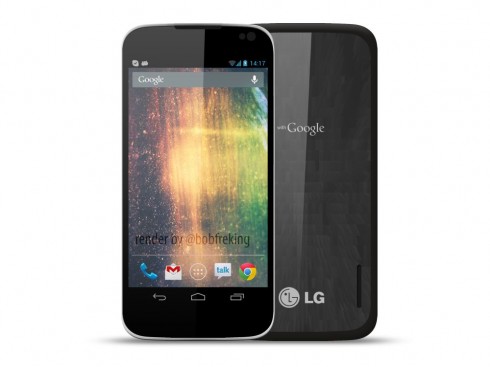 LG Google Nexus features a 1.5 GHz quad core Snapdragon S4 Pro processor, with Adreno 320 GPU, 2 GB of RAM and a 4.7 inch display with 768 x 1184 pixel resolution. The odd resolution is generated by the on screen virtual Android buttons, that take up some of the screen estate. At the back of the phone there’s an 8 megapixel camera, so the 13 MP shooter of the Optimus G is not kept this time. The OS of choice is Android 4.2, that may or may not be Key Lime Pie. It may end up as a new flavor of Jelly Bean…

People are complaining about the fact that the LG Nexus 4 is rumored to only offer 8 GB of storage and no microSD card. That would be a huge mistake from its maker and I doubt it would happen. Rumors also say we’ll see this smartphone launched on October 29th, so there’s a little bit more waiting. Let’s enjoy Bob Freking’s render till then!