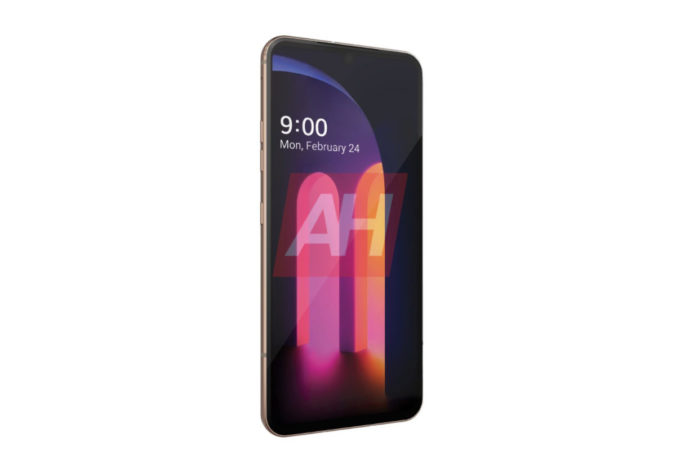 If MWC 2020 was still held tomorrow and Monday would have been the busiest days, with announcements from LG, Nokia and Sony. I’m talking about flagships of course, like the Nokia 8.2 or 9.2, the Sony Xperia 1.1 and the LG V60 and LG G9. Well, we’ll have to settle for leaks, as Android Headlines has just revealed a fresh render of the LG V60.

We only get to see the front side, sadly. The LG V60 ThinQ should be a 5G smartphone with a front side that’s mostly screen. The bezels are slimmer compared to the LG V50 ThinQ. There’s also a waterdrop notch, much like the LG G8X had last fall. We also see a dedicated Google Assistant button and volume buttons on the left side of the handset. The Power button stays on the right side, but can’t be seen in this image. The gold hue is atypical for a flagship launch in this day and age, but at least it’s not a bland hue.

A previous leak mentioned a large battery inside, a 5000 mAh unit good enough for that amper eating 5G. At the back we should find 4 cameras, probably including an ultra wide shooter, a telephoto cam, Bokeh cam and main shooter. 4 microphones are also rumored to be included here. This time LG has used a bump for its camera module, since it includes more complex tech. We also get a Snapdragon 865 processor, 8 GB of RAM or hopefully 12 GB, plus at least 128 GB of storage.

It even keeps the audio jack and microSD card slot. I expect the secondary screen case from the predecessor to make a comeback as an excuse for LG not to launch foldable screen phones.

About Kelvin
Passionate about design, especially smartphones, gadgets and tablets. Blogging on this site since 2008 and discovering prototypes and trends before bigshot companies sometimes
Huawei Mate X2 Has a Lot Going on: Stylus, Laptop Mode, periscope camera   Google Pixel 4a Gets Rendered by Letsgodigital and Concept Creator