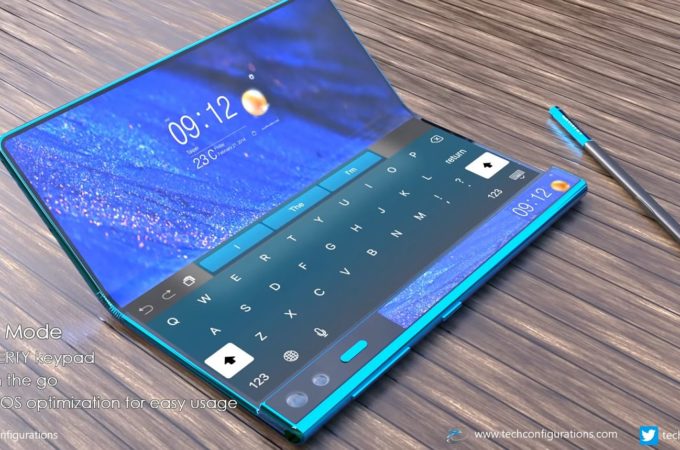 Tomorrow Huawei will unveil the Huawei Mate XS smartphone, a new foldable phone that’s largely the Mate X with some upgrades. It gets a new CPU basically and that’s it. A Huawei Mate X2 is also in the making, but we’re a long way from that. Till it comes we have a concept of it rendered below courtesy of Techconfigurations. Let’s check it out!

First of all, we’ve heard rumors that both the Galaxy Fold 2 and Mate X2 will adopt styli, so that’s exactly what happens here. Huawei Mate X2 has a stylus slot and also an in display fingerprint scanner, on the “stub” part of the body. It gets a whole new Huawei S Pen, which feels a bit like the Samsung one. It has its own battery, gesture support and Bluetooth connectivity. Now the actual device comes with an 8 inch OLED screen when unfolded, but also gets a brand new “laptop mode”.

Techconfigurations rendered the device in a beautiful blue hue and put some strong cameras on it. There’s a dual front camera, with a 32 MP and 16 MP sensors, while at the back we have a 40 MP main camera, 12 MP telephoto cam, a 40 MP ultra wide camera and a 5 MP depth camera. There’s 3x optical zoom and OIS here. The earpiece has been cleverly disguised at the top of the screen. From what I can see now the screen is available on the inside of the device, not the outside.

There’s also a smaller screen on the “stub” part for notifications and other useful info. It’s a clever way of not having to worry about the scratches that an external screen would suffer. The laptop mode offers a full virtual QWERTY keyboard and a software experience different form the regular Android one. This concept actually sounds much better than the Mate Xs to be honest. We also get a new Kirin 1000 5 nm CPU, plenty of RAM and storage and a 6000 mAh battery with 65W fast charge.

The screen has both HDR support and 120 Hz refresh rate. The $2500 price tag kind of makes sense with all of these features…

About Kelvin
Passionate about design, especially smartphones, gadgets and tablets. Blogging on this site since 2008 and discovering prototypes and trends before bigshot companies sometimes
Folding iPad Pro is the Stuff of Dreams for Now   LG V60 Leaked by Android Headlines, the Flagship Meant for Cancelled MWC 2020