There was trend at some point to crazy concept phones with crazy specs, but that has dwindled down lately. Well, now it’s back again courtesy of the design below, created by TheTechnoToast. We’re dealing with a Nexus  handset made by LG yet again and packing some crazy futuristic specs. 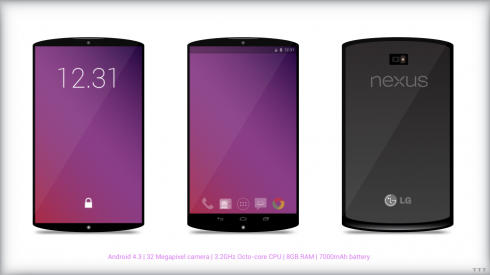 This device runs Android 4.3 and features a 32 megapixel camera at the back, that’s able to shoot up to 4K resolution video. Inside the LG Nexus 5 there’s an 8 core processor, 8 GB of RAM and a 7000 mAh battery, that probably takes up the most room inside the phone. The battery is supposed to last an entire week on a single charge.

NFC, Bluetooth 4.0, LTE are all included here, as well as a removable back that’s spring loaded. The idea is that if you push the back, the glass plate will spring up and you’ll access the microSD card slot, dual SIM slots and the battery. The screen upfront is a 4.8 inch display with Full HD resolution. The Nexus 5 is slimmer than the Nexus 4 and a bit heavier. Both the front and back of the smartphone are covered in Gorilla Glass 4, unbreakable glass.

About Thrystan
Nokia Lumia 1 Tablet by Jonas Daehnert, Take 2   iPhone 6 is Compact But Has a Bigger Screen and Customizable UI