Sometimes it doesn’t take a flashy concept phone to impress us, but rather a simple, modest and minimalistic one, like the device shown below. Meet the Microsoft Surface Lumia smartphone, rendered by Deviantart user link6155. 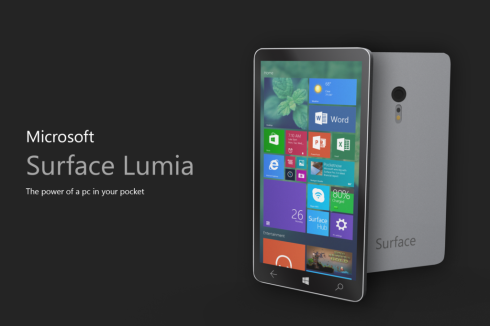 The designer made this smartphone in Photoshop, using its 3D features. This is a bare render, as its creator says, but it’s pretty good. An interesting idea associated to it is being able to plug the phone into an external display and make it a desktop replacement. It would have Windows 10 on board and it’s probably made of magnesium like the Surface tablets.

The Microsoft Surface Lumia handset has 3 capacitive buttons below the display, that are pretty simple and minimal. Seeing how modern UIs are going, the device should probably get virtual buttons instead. The design is pretty basic, rectangular and with pretty big bezels. The camera is minimal, has what seem to be two flashes with true tone color, while the thickness of the Surface Phone seems to reasonable, compared to the Surface tablets, that are chunky.

About Kelvin
Passionate about design, especially smartphones, gadgets and tablets. Blogging on this site since 2008 and discovering prototypes and trends before bigshot companies sometimes
Samsung Galaxy A9 Teased by Kiarash Kia   Puzzlecluster is a Brilliant Idea, Turns Dead Phones into a Super Computer