Windows Slate 7, a Windows Phone 7 Tablet or a Portable Gizmo With Windows 8?

Jozef Kocúr designed a very appealing tablet called the Windows Slate 7, a device doesn’t seem to bear any other branding than the one of Microsoft. This internally made slate could be running a modified version of Windows Phone 7, as shown here, since this is certainly not the Windows 7 desktop version we all know. 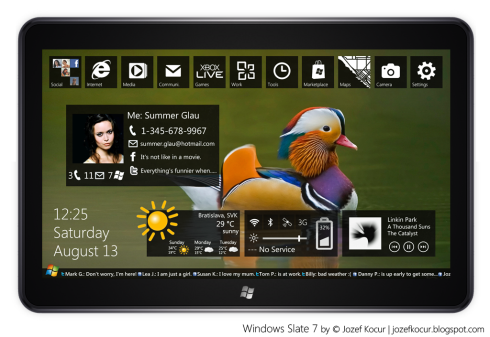 We wouldn’t mind if this were the Windows 8 tablet that some people were mentioning as CES 2011 material… Josef promised to reveal details and specs in the following days and we’re certainly hoping for dual core and 10.1 inch action over here…