WPhone Concept by Retovona is a Beautiful Windows Phone 8 Design

Designer Retovona came up with a very interesting Windows Phone 8 concept called WPhone. We’re dealing with a beautiful handset here, that seems to have an edge to edge screen and a pretty thick metallic body. It separates the screen panel and the lower side of the facade, where the Windows Phone buttons are. 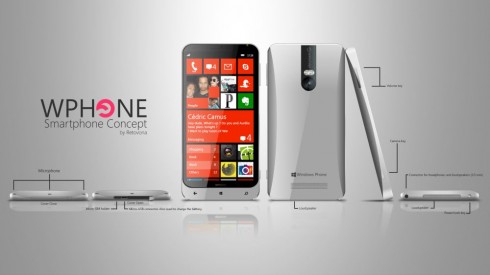 At the back we’ve got a big speaker and the device is shown in both white and black. The upper half of the WPhone is a bit iPhone-like and I very much like the discrete notification LED from the right side. Also, the camera mechanism looks elegant and it’s integrated in a very subtle way. WPhone has at the lower side a micro SIM holder and micro USB connector, also used to charge the battery. They’re covered with a special lid, while up at the top we find a big loudspeaker and a Power/Lock key.

There’s also a camera key on the side and I like how the Windows Phone Metro UI fits to the big edge to edge screen. If you allow me to speculate, this would make a very good Surface Phone, with a dual core or maybe quad core Snadpragon S4 CPU, a 4.5 inch display with a 1280 x 768 pixel resolution, 32 GB of storage, 1 GB of RAM and an 8 megapixel camera. Would this make a good Windows Phone flagship for you? In the end I’d like to say that Retovona said on the site where he/she promotes the work he/she does that this may be a last concept. Please encourage the designer, so we may see more work from him/her in the future!