A very interesting thing has happened here at Concept Phones, with one of our readers named Anthony requesting a special design fitted to his preferences and Bob Freking performing that task. Anthony wrote us an email, saying he wants a Motorola Google Nexus phone with RAZR branding and a bunch of specs that you can learn below. We forwarded the request to Bob and this is the result: 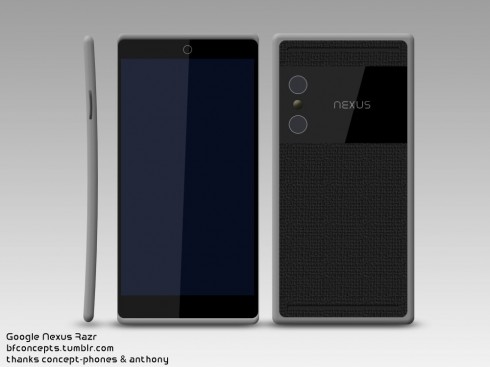 So, we’re dealing with the Nexus RAZR handset here, with a dual 15 megapixel Carl Zeiss camera with 2D and 3D photo capture and dual LED flash, plus 1080p video recording at 60 fps. The device has brushed aluminum edges and the ability to play back both 2D and 3D content, with support for stereoscopic 3D. As far as display goes, we’ve got a Super AMOLED Plus 1080p screen with a 5 inch diagonal and edge to edge technology. This Nexus concept measures 8.7 mm in thickness, weighs 107 grams and has 2 GB of RAM, as well as 32 GB, 64 GB or 128 GB of built in memory.

At the front we’ve got a 3 megapixel camera and inside the phone there’s a quad core Snapdragon S4 Pro 1.7 GHz processor. Other features include microSD card slot, camera dedicated button and a proprietary charging port on the bottom. Bose audio speakers are on the top and bottom of the device, NFC is here as well and the OS of choice is Android 4.1 Jelly Bean. Everything is powered up by a 4000 mAh battery with a non removable unibody integration. The device looks simplistic, very thin and I like that small curve it’s got towards the bottom.

Now remember:  YOU can create your own phone as well, just send us an email and we’ll figure out the ideal design and turn to our friends, the designers.

[Thanks Bob Freking for the design and Anthony for suggestions]