People are really excited about Motorola’s upcoming Google XPhone, so they started to imagine how it would look like. Among them there’s the designer Jason Chen who not only created a concept video of the device, but also a bunch of renders for the Google XPhone. 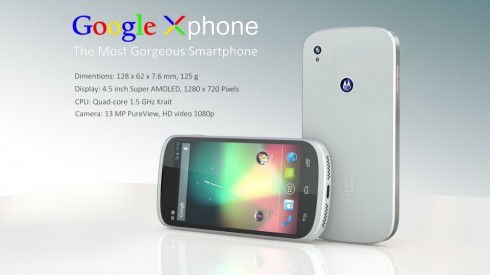 We’re dealing with the upcoming superphone from Google and Motorola, a sort of Nexus device without the Nexus branding, from what we’ve heard. The handset comes with a 7.6 mm thick chassis, still thicker than the Motorola Droid RAZR and it weighs 125 grams. It features a 4.5 inch Super AMOLED display with a 1280 x 720 pixel resolution and a quad core 1.5 GHz Krait CPU, plus a 13 megapixel PureView camera with Full HD video.

The specs of this model are pretty unrealistic if you ask me, since Nokia would never lend Moto their camera tech and also the device is kind of the same with the Nexus 4, as far as specs go. Many people disliked the back area of the Nexus 4, so at least that’s changed, being replaced by something that looks like metal. What do you think?

About Thrystan
Nokia Lumia Watch, a Necessary Device Created by Mohammad Mahmi Azimi   HTC M8 With Windows Phone 8, the Follow-up to HTC One