YOU Design the Next Nexus Phone! Post Your Suggestions Here!

Bob Freking, one of the most prolific designers on Concept Phones had a great idea: asking all of you fans of our website and readers what ideas you have for the next Nexus Phone. Below you can see a message from the designer and we welcome your comments on this article and on Facebook regarding the concept he’s preparing. 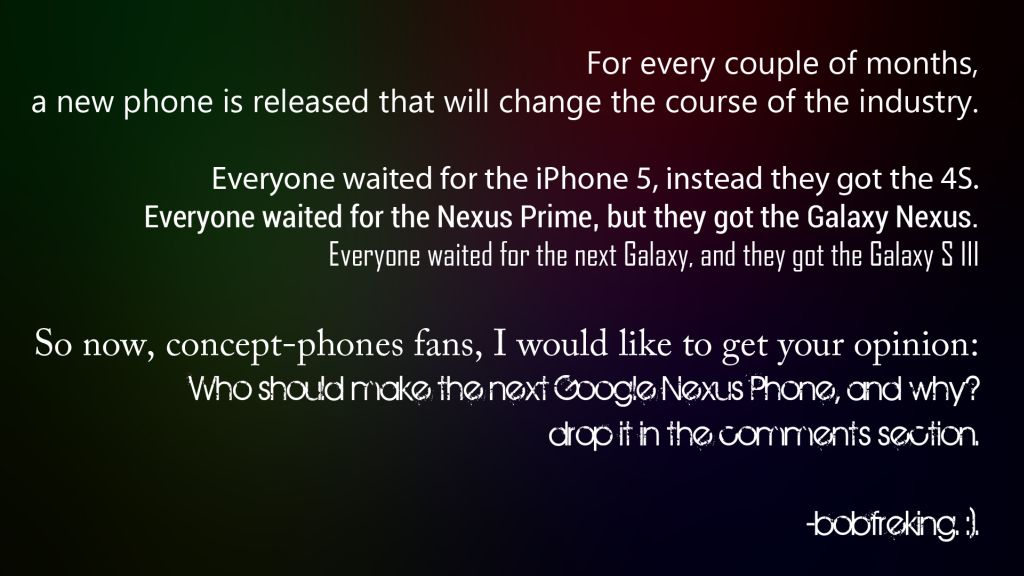 The design that will result will be based on your comments and the final product will come pretty soon, since Bob Freking is known for his speed in creating new works. I guess that now’s my turn to suggest the maker and the features of the new Nexus Phone. Well, I think that ASUS should be given a shot and maybe integrate this Nexus smartphone with a Nexus tablet, like the PadFone. Anyway, I imagine that the handset will have a 4.55 inch diagonal, that seems ideal nowadays, 1080p resolution, a 12 megapixel camera, LTE and 64 GB of storage.

It will also have microSD, NFC, microSIM, a 2.500 mAh battery if possible and a Snapdragon S4 CPU or maybe even the Snapdragon S5 one. As far as design goes, I’d like to see a phone version of the Transformer Prime tablet, so a metal back, very thin device, crisp IPS+ screen and very cool sloped edges. So, now what are your ideas?

Tagged in:Bob Freking, how to make your concept phone, make your phone design, Nexus Phone 2012, you design the phone