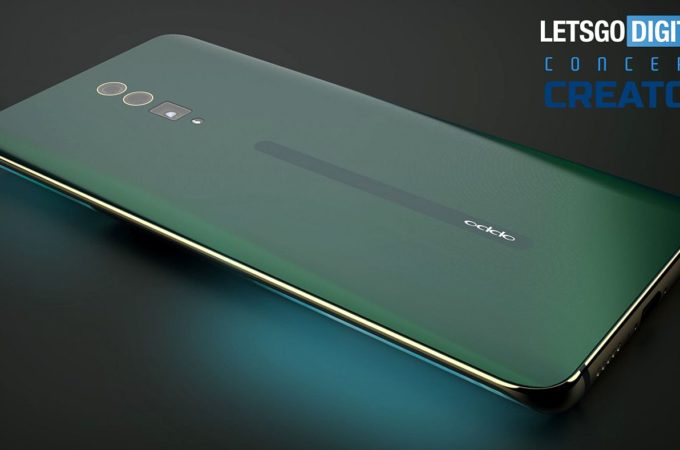 I don’t know if you remember, but Oppo unveiled several prototypes and mobile-related technologies last year that were pretty revolutionary and advanced. They actually came up with the 10x hybrid zoom and 5x optical zoom, plus the periscope camera before Huawei. They have also been working a lot on the camera below screen thing. Now they’re back to apply all the innovation to a new phone, the Oppo Find X2.

The Oppo Find X2 has leaked and also received some renders and details from a nifty crossover: Letsgodigital and Concept Creator. They continue in the vein of the Oppo Reno 3 and the Oppo Find X series, creating a waterfall screen smartphone, that brings 5G connectivity. Now this design has been tried and tested before and the waterfall screens seem like the way to go now. We’ve seen them on the Vivo NEX 3 and Huawei Mate 30 Pro, replacing physical buttons with virtual ones.

The back side still features that trademark Oppo line, right below the camera area. Speaking of camera I also see a square lens there, signalling a new level of zoom. The front camera has been hidden under the screen, something that Oppo has been working on for quite some time. Oppo Find X2 has a screen that’s curved at 88 degrees and this screen is said to offer 120 Hz refresh rate. A Snapdragon 865 processor is mentioned too, plus Android 10 with ColorOS 7 on top.

Back to the camera, since Oppo often uses Sony image sensors, they may well use the new Sony 64 MP shooter, accompanied by a 5X optical zoom camera or even a 10X one. There should also be a third ultra wide camera in the package. Charging should reach a new level, particularly since the Oppo Find X Lamborghini Edition already had a crazy 50W charging. This time they could take it to 65W and the battery capacity could go to 5000 mAh.

All’s fine and dandy, but I expect more original color combos for the case and also even more cameras…

via Concept Creator and Letsgodigital

About Kelvin
Passionate about design, especially smartphones, gadgets and tablets. Blogging on this site since 2008 and discovering prototypes and trends before bigshot companies sometimes
OnePlus Concept One Looks Very Convincing in Video Render   LG G9 Renders Show Quad Camera, Not Many Changes from G8X