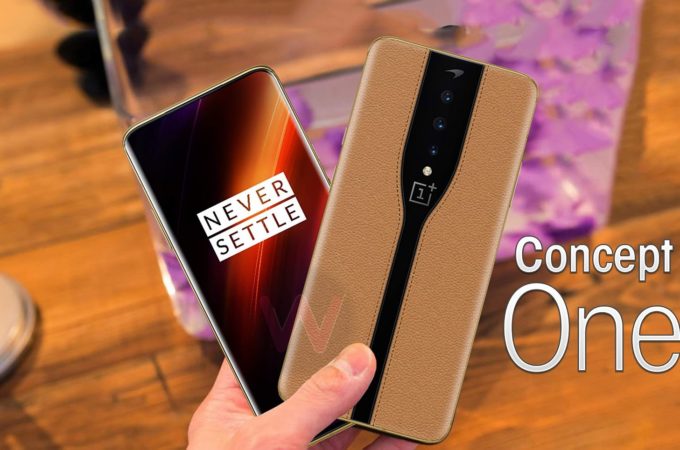 So, in a few hours we’re about to see the OnePlus Concept One unveiled at CES 2020, in Las Vegas. Before that happens we have some renders of the device, done by Waqar Khan, who used all the speculations and leaks about the phone to create a very detailed video, shown below.

The device is going to take an original approach, with a back side covered in leather, a throwback to the LG G4 maybe. Also, its camera area has a special type of glass cover that camouflages the camera from some angles, depending on the way it catches the light. The phone itself isn’t going to bring any revolutionary specs, as far as I’ve heard. It should keep pretty much the same specs as the OnePlus 7T Pro McLaren Edition.

Also, there should be a bit of McLaren identity here, if you look at the Papaya Yellow accents that should appear on the sides. There’s something very racing-inspired around the back side, too. Also franly speaking, I like the leather implementation on the back more here than on the LG G4. Not sure how the public will receive the camera format of the OnePlus Concept Phone, since it looks like a zipper being open and that’s a bit sensual…

If OnePlus wants to offer us everything and the kitchen sink, they may make this device 5G, offer a Snapdragon 855+ CPU, 12 GB of RAM and a serious triple camera, with a large MP count sensor, an ultra wide shooter and at leas 3X optical zoom camera. I also expect very fast charging, both wired and wireless. The wired one should pass 45W. Anyway, in a few hours we’ll learn what the real deal is at CES 2020.

About Kelvin
Passionate about design, especially smartphones, gadgets and tablets. Blogging on this site since 2008 and discovering prototypes and trends before bigshot companies sometimes
Samsung Galaxy Fold 2 Gets the Ultimate Detailed Treatment from Concept Creator, Letsgodigital   Oppo Find X2 Has 5G, a Waterfall Screen and Camera Goodies