From Deviantart user worldfeel comes an ironic tablet, if I can call it that. That’s the Soviet Tablet PC of the year 2019, shown below. Red is obviously the color choice and the emblem of this device is Stalin’s profile (unless I’m confusing him with Lenin). 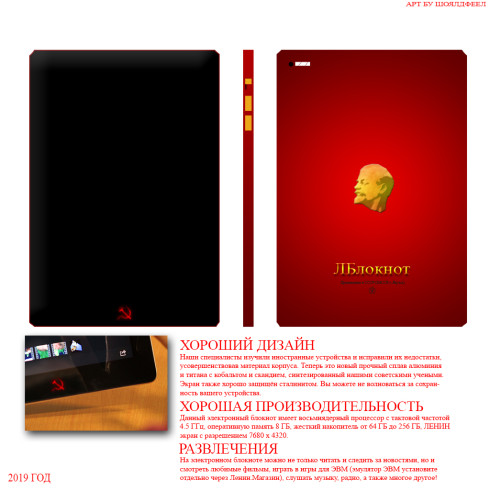 The Communist device also comes with the hammer and sickle for a real Soviet statement. I can’t read Russian, but from what I make out of the text, this model comes with a crazy resolution of 7680 x 4320 pixels, and a few TB of storage. It’s probably powered by uranium or some other absurd source of energy, maybe even Tiberium if you catch my drift. The design is nowhere near elegant or nice, since this is a slab with straight lines and even the corners get an extra line instead of a circular area.

I’ve seen a North Korean tablet a while ago, made by the State and even that one wasn’t this… red. Anyway, this is a mere ironic concept, I guess, but it could have been cooler or funnier. Maybe throw in the mix some doctrine vids or the occasional rationalized food app?

About Kelvin
Passionate about design, especially smartphones, gadgets and tablets. Blogging on this site since 2008 and discovering prototypes and trends before bigshot companies sometimes
Nokia Lumia 935 is the Successor to the Lumia 930, Rendered Here!   Jermaine Smit Teases Foldable Tablet