There’s been talk about a foldable Samsung tablet for the second half of the year, but till then we’ve got the usual concepts. Jermaine Smit is back with a flexible and foldable device, that’s pictured below. 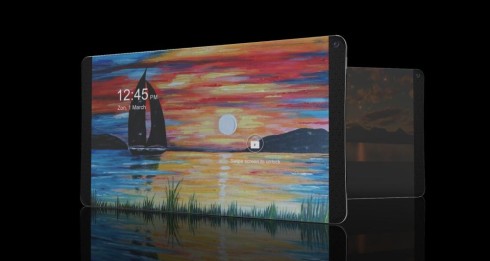 This is a mere teaser of what’s coming, a slate that to me looks like an Apple model and also a bit like a new LG G Pad. The device seems to adopt an edge to edge display and I’m guessing it will fold in a more modest way, maybe like the LG G Flex. I see metal and glass here, judging by the appearance of the slate. While flexing a phone has a purpose, because leave them in backpacks filled with heavy books or in the back pocket and sit on them, why make a tablet flexible?

The only way a foldable tablet makes sense is if you can actually fold it in two and make it a smartphone. That triggers a new problem: you will create a very thick smartphone you will be ashamed to use in public, because it looks bulky. So what’s the advantage? Why do YOU want a foldable tablet?

About Kelvin
Passionate about design, especially smartphones, gadgets and tablets. Blogging on this site since 2008 and discovering prototypes and trends before bigshot companies sometimes
Soviet Tablet of 2019 is Sci Fi and… Rigid   Samsung Galaxy Note 4 Gets Sparkly Render from Hasan Kaymak