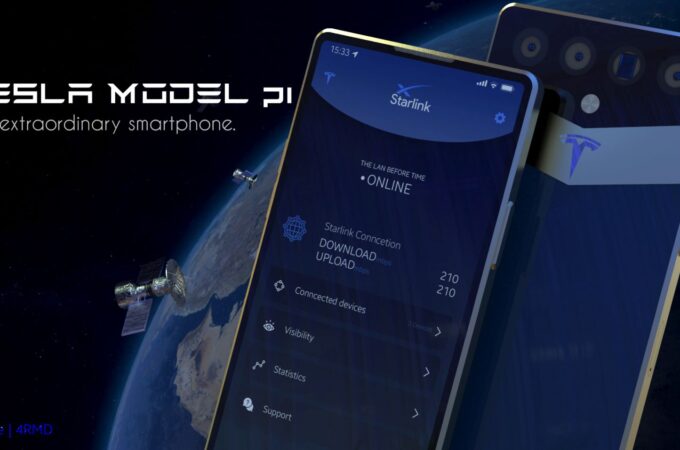 While Apple is really serious about getting into the car business, Tesla seems equally serious about getting into the smartphone biz. They’ve been making power banks and phone cases and now they may well make a smartphone, since they already provide Internet and they’re one step away from becoming a full fledged mobile carrier. As they enter this new phase, the concept Tesla Model Pi phone shown below makes even more sense.

The creation of designer 4RMD, this Tesla Model Pi smartphone is dubbed “An Extraordinary smartphone from Elon Musk“. The device clearly draws inspiration from Tesla’s cars and delivers an angular design and a 6.9 inch flat screen with 4K resolution. The refresh rate goes up to 240 Hz and the device also has an in display fingerprint scanner, Starlink connection and the promise of 210 Mbps downloads.

It does crypto mining and appears to be a bit bulky at first sight. It has flat aluminum adges and an under display selfie camera. It also has special glass that uses electrical current to tint the lenses and make the back camera disappear. This is something that OnePlus did on a concept phone about two years ago. The main camera is a 108 MP shooter here and we also get a telephoto camera with 3X optical zoom, a periscope telephoto camera with 10X optical zoom and a 12 MP ultrawide camera.

The device has a special magnetic charging pad with solar charging. Available in deep blue, solid black or candy red, this smartphone is a bit monolithic for my taste, but it may have its own niche cut out for it, made of Tesla enthusiasts. My only gripe with it is the form factor the physical buttons. Other than that it’s not bad.

About Kelvin
Passionate about design, especially smartphones, gadgets and tablets. Blogging on this site since 2008 and discovering prototypes and trends before bigshot companies sometimes
This may be the perfect Apple VR concept… (Video)   Sony Xperia 10 IV Leaked in Images Via @OnLeaks; No Big Changes?