Before you’re intrigued as to why I’m posting this, let me make this clear: this device is a concept used by Nokia in a video to showcase the NFC abilities of its handsets. Thus, don’t expect the best of design here, just a simplistic unit with a very rounded form factor. 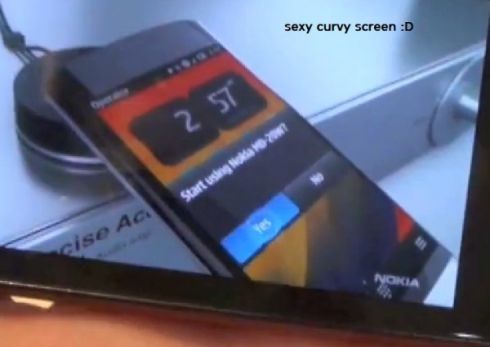 This is a Symbian Belle Nokia model with a curved screen that was spotted in a video running on a Nokia 700, that was demoed recently. This seems to continue the trend started with the Nokia N9, just like the N8 opened the road for devices to follow it. One must also notice that the call/end/menu keys are capacitive, which is certainly new to the world of Symbian.

There’s a speculation that this is actually a qHD display handset, the N8-01, if there is such a thing out there. Also in this leak there’s an interesting service called Nokia AirCloud, making us think of a future solution for working in the cloud entirely, maybe some backup, maybe some Google Docks style action?

About Thrystan
Samsung Nexus Z, Could This be The Google Nexus Prime?   Amazon Kindle Tablet Gets a Close to Reality Mockup