Samsung Nexus Z, Could This be The Google Nexus Prime?

With all those rumors out there about the Google Nexus Prime being built by Samsung, I guess that it’s safe to say the device might look something like the Samsung Nexus Z concept below. Created by Abhi Aravind, this unit is pretty sleek and partially reminds me of a Nokia N9. 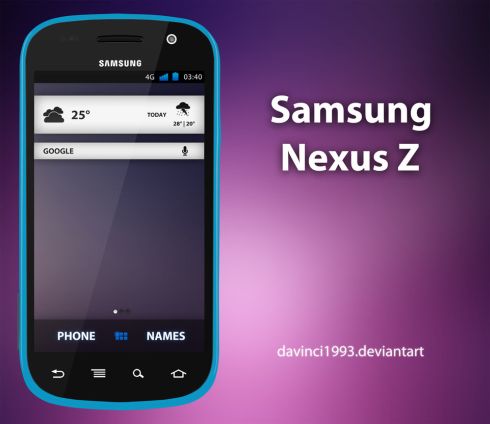 The device runs a new TouchWiz UI, namely version 5 and it comes with Android 3.0. This Honeycomb phone uses a 4.4 inch Super AMOLED Plus display with 540 x 960 pixel resolution and a 1.4GHz Cortex A10 processor. There’s also an 8 megapixel camera at the back with autofocus, Xenon flash and 1080p video capture. 1GB of RAM and an Nvidia 512MB GPU will handle the 1080p video playback on this beauty.

Samsung Nexus Z also supports USB 3.0 connectivity, 4G and comes with 32GB internal storage. Other than that the smartphone looks pretty normal, maybe like a Nexus S without the curved design. I wonder what the blue line around the edges is made out… maybe plastic, maybe polycarbonate, or maybe aluminum coated with paint just like Nokia did with the N8.