Microsoft Lumia 1280 is very basic phone, that theoretically would make an interesting low end device or midranger, but apparently, it’s a pretty high end affair. It uses a 5 inch Full HD display, with ClearBlack technology, while under the hood there’s a 2.2 GHz Snapdragon processor. 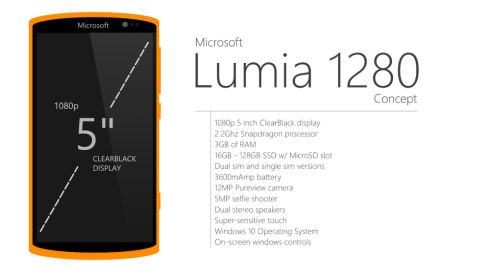 We’ve also got 3 GB of RAM inside, 16 to 128 GB of storage and a microSD card slot. The Lumia 1280 concept is a dual SIM unit, but there’s also a single SIM version. It comes with dual stereo speakers, a 3600 mAh battery and a 12 megapixel Pureview camera at the back. There’s a 5 MP selfie shooter integrated into the front and Windows 10 as the OS. When I said the design was basic, I meant it feels like a regular rectangular phone, fit into some sort of rounded plastic case.

The designer behind this project is called Flow Scratcher on Google+ and he made the concept in Inkscape. I’m really curious about the back side of the phone, but maybe we’ll get to see it later on. In the meantime, know that there are on screen controls for Windows 10, not capacitive ones.

About Kelvin
Passionate about design, especially smartphones, gadgets and tablets. Blogging on this site since 2008 and discovering prototypes and trends before bigshot companies sometimes
Back to the Roots of the First Macintosh With a Fresh Concept: Macintosh Meets iPad Air   Windows Phone 10 Render Makes Everything Transparent and More Fluid