Created by Sunkotora from Deviantart, this Nokia concept with Android 4.1 Jelly Bean is the wet dream of all people who don’t like Nokia’s involvement with Microsoft. Symbian is dead, MeeGo too, Sailfish OS is a bit too green to be viable, so Android sounds mint for a high end Nokia… like the Nokia One Way render below. 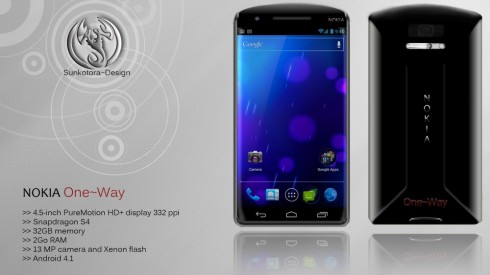 We’re dealing with a beautiful phone with a tough back design, a glossy all glass facade with a rounded design and some very discretely integrated capacitive keys. This Nokia Android phone has a 4.5 inch PureMotion HD+ screen with 332 ppi pixel density, a Snapdragon S4 CPU, hopefully the quad core kind, 2 GB of RAM and 32 GB of storage. There’s a 13 megapixel camera with Xenon flash at the back and maybe some PureView technology and Carl Zeiss in the mix.

The device runs Android 4.1 Jelly Bean and the only thing I don’t like here is the top part of the device. It looks like a powerful and elegant machine, one that justifies a high cost… Are we ready for such things or will be left forever in a world where Nokia means… coloured tiles?!