Ben Ling imagined the way the Sony 2013 flagship concept will look like and created the Sony Xperia Odin render. As expected, this is a Full HD 5 inch smartphone, one with a quad core CPU and an all black chassis. It’s got a piano black finish, rectangular shape, capacitive buttons and a 13 megapixel camera with 16x digital zoom. 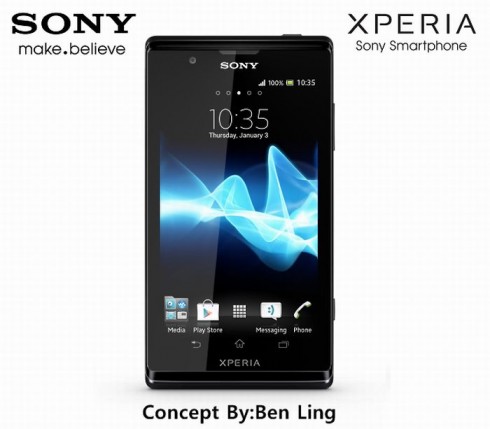 Sony Xperia Odin features a 5 inch Full HD TFT shatter proof and scratch resistant screen, a quad core 1.5 GHz Krait CPU and a replaceable battery. Xperia Odin features an Exmor RS sensor, Sony White Magic technology and a front 1.9 megapixel camera. The CPU is of the Qualcomm Snapdragon S4 Pro kind and involves an Adreno 320 GPU as well. It’s strange to see that on the specs list the buttons are mentioned as on screen ones, although the picture seems to show capacitive buttons. Of course, I may be wrong…

The Sony Odin measures 9.2 mm in thickness, weighs 115 grams, has NFC, 2 GB of RAM and 4G LTE. Android 4.1 Jelly Bean is the OS of choice and we also have 32 GB of storage, Sony Mobile Bravia Engine 3 technology and xLOUD. Under the hood we’ve got a 2500 mAh battery and the device supports multitouch for up to 10 fingers. I can’t say I’m impressed very much by the design, that’s pretty much the same as the other ones that Sony applied recently… Are you?