Although we’ve seen press renders of the Nokia Android phone known as Normandy, there’s something missing from all of them: elegance and a cleaner design. Now Techradar decided to render the device and give it its own video, that’s shown below.

They got inspired by the leaks surrounding this handset and created these renders. As you probably know, the handset is said to pack a Snapdragon CPU, 4 inch display, 5 megapixel camera and it even got certified in parts of Asia already. For some reason the Android experience is covered up with a set of tiles-based UI. 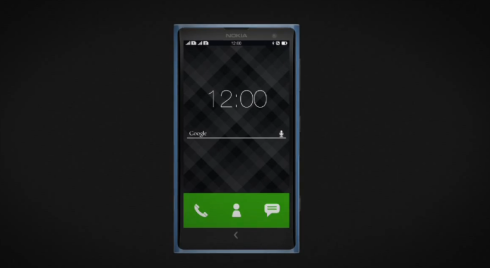 There’s a slight Nokia N9 vibe coming from this model, but the Pro Cam app and Skype sure look hot in that video. I have only one fear here: that the Nokia Normandy is going to end up a bulky midrange phone that nobody wants to buy. Or, if the resolution is below 720p it will be a low end phone nobody wants to buy. Still, the concept per se is cool…

About Kelvin
Passionate about design, especially smartphones, gadgets and tablets. Blogging on this site since 2008 and discovering prototypes and trends before bigshot companies sometimes
Samsung Galaxy S5 Gets Poster Like Image and Camera App Concept   iPhone 6C Rendered by Dani Yako and Packing 4.7 inch Screen