It’s been a while since we last saw a Nokia concept phone, although the Nokia E900 design looks more like an Internet tablet than a handset.  The device comes with uber specs and it finally combines the business aspect of the E Series with a QWERTY keyboard and huge touchscreen display. 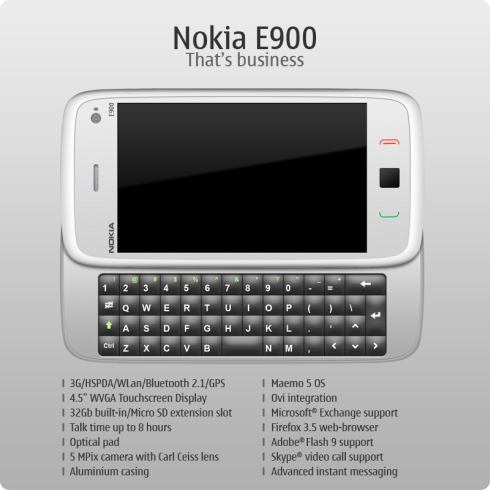 Nokia E900 supports 3G/HSDPA connectivity, plus WLAN, Bluetooth 2.1 and GPS and, as you can see it packs a pretty big display, a 4.5 inch WVGA touchscreen. 32GB of internal memory will be more than enough, coupled with a microSD memory card slot, plus there’s a battery on board providing up to 8 hours of talk time.

An optical pad is also among the specs, plus a 5 megapixel camera with a Carl Zeiss lens and aluminium casing at the exterior of the device. Maemo 5 is the OS of choice for E900 and the handset also supports Ovi integration, Microsoft Exchange, Firefox 3.5, Adobe Flash 9, Skype video calls and more.