Bob Freking came up with a humorous concept phone since it’s the weekend and he defines it as the phone of Chuck Norris and the hammer of Thor: Nokia Lumia 3310. A tribute to the classic Nokia 3310, a phone that everyone I’ve ever known in my life used at least once, this device keeps a slight resemblance with the original, but adds Windows Phone 8 on top of it. 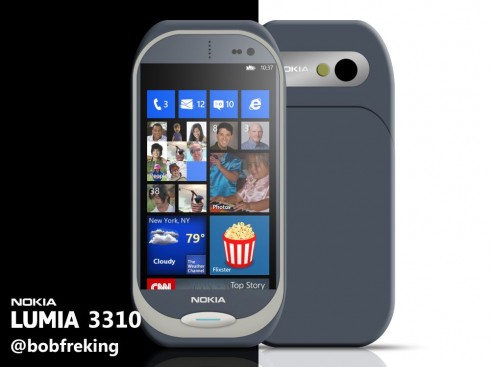 The front lower side is what gives away the identity of the phone (especially the Home button) and if it gets a virtual numeric pad to mimic the original it’s even more fun. For the sake of crazy jokes, Bob Freking imagines the Nokia Lumia 3310 with a “9,3024,823,904 Petapixel PureView Camera” and a 7 billion GHz 56 core processor, an irony regarding the mindless evolution of today’s high end smartphones. Also on board there’s a “super duper ultra mega ultimate HD screen”, that fits the current bragging of Nokia with the Lumia 920 screen they keep praising.

This model is also meteor proof, being able to survive mass extinction and it’s got an app that cures cancer and AIDS… Well, that’s the sort of joke that Ricky Gervais would do, if you ask me. Honestly speaking, with so many fans out there, if they resurrect the Nokia 3310 and give it WHATEVER specs, the nostalgics will buy it!