I was searching the web for some new information on the Samsung Galaxy S IV and I came across the article in the source below, with some interesting pictures and information. Considering how substantial the rumors about the future Galaxy S are, I would have expected to see more leaks or concepts by now… Anyway, we’ve got a bunch of Galaxy S4 pics for you below: 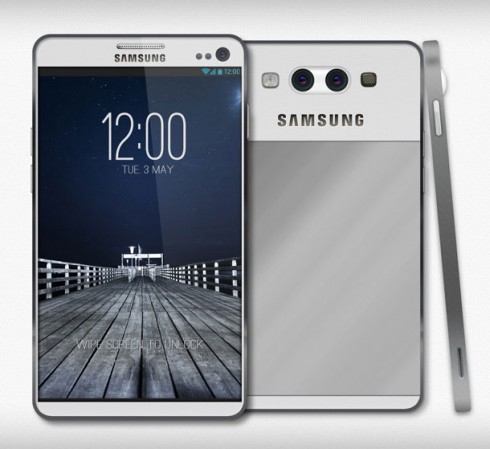 You should know that rumors say we should expect Mobile World Congress 2013 to bring us the new Samsung flagship, with specs that include an Exynos 5 CPU (ARM15) or maybe Qualcomm’s Snapdragon S4 Pro quad core CPU. It will also have 2 GB of RAM and rumors say that the device will sport a 5 inch display this time, with a Full HD resolution and OLED technology. The S4 will bring 4G LTE connectivity, Android 4.1.1. Jelly Bean as the OS of choice and 16/32/64 GB of storage. An improved battery will also be here and for some reason there’s a dual camera at the back, on this Samsung concept.

We’ve got a front camera that seems to be pretty powerful and other specs should include NFC, a microSD card slot and maybe even a nano SIM slot. Maybe this time Samsung will surprise us and give up plastic for its case and opt for aluminum and glass, maybe anodized aluminum or maybe kevlar like Motorola. From what I see here, we might as well consider the Galaxy S4 a dumbed down Galaxy Note II, if I may say so. Where’s the wow factor and the new specs?

About Thrystan
Nokia Lumia 3310 is Both the Phone of Chuck Norris and Thor’s Hammer   Google DroidBook Nexus Laptop By Bob Freking, the MacBook Killer