While everyone is looking for an iPad killer, Google and its hardware partners could sneak up and deliver a blow to Apple in another segment: laptops. At least that’s what Bob Freking imagined, when he created the Google DroidBook Nexus, a beautiful laptop concept shown below. I’ve heard rumors that the next Android will actually be focused on netbooks and bigger devices, but that’s just a rumor. 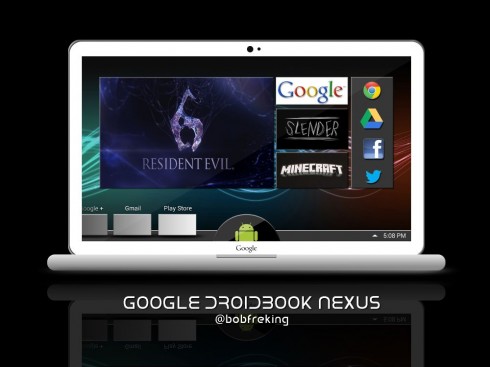 Bob Freking mentions that after buying Motorola, Google discontinued Lapdocks for the Moto phones, so they may be preparing their own desktop with Android or their own laptop. The DroidBook Nexus features a 3 megapixel HD front camera, uses a Core i7 CPU with Intel Integrated Graphics (not my first choice for a Google setup) and also features a 17 inch 2560 x 1440 pixel display. The result is a laptop concept that’s thinner than a MacBook and has a full keyboard.

It will reach 12 hours of usage and it even has an optical drive, if there’s any need for that… Windows games and apps can be converted to Android through a special app and the device is able to run famous games like Minecraft, Resident Evil 6, Crysis, Final Fantasy Online and the famous app Photoshop. The designer wasn’t clear about the OS on the device, so I imagine it’s a cross between Chrome OS and Android 5.0, or something like it. Price this baby right and we’ve got a hit!