Bob Freking is back and he has around 4 new concepts for some very interesting devices. The first I’m going to show you is the Nokia Lumia S, a Windows Phone 8 Apollo smartphone with a 1.5 GHz dual core Snapdragon S4 processor and a 4.5 inch 1280 x 720 pixel display (ClearBlack HD). There’s also that nifty PureView camera in the mix… 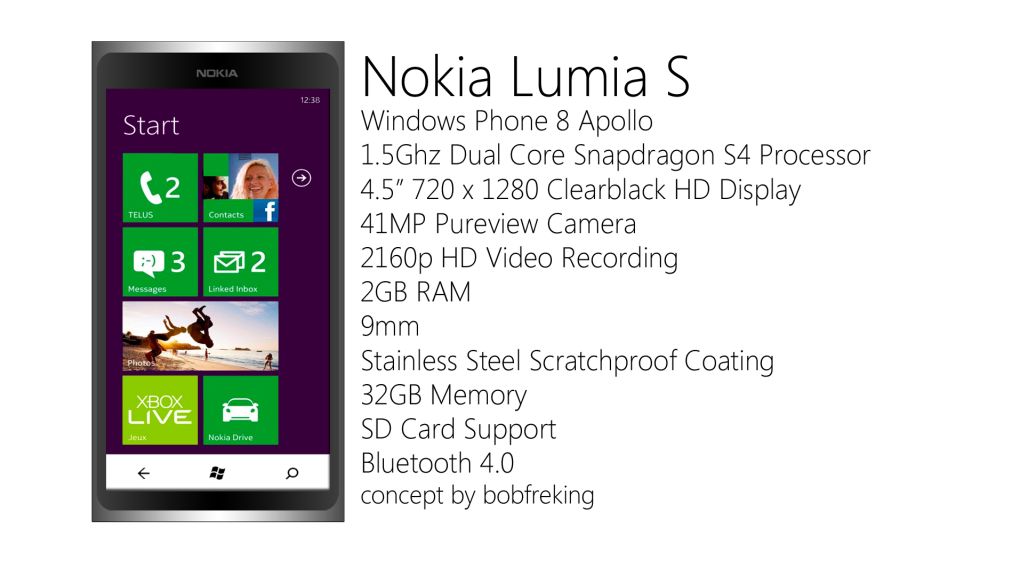 Nokia Lumia S features a 41 megapixel camera sensor with 2160p HD video recording. Other specs of this WP8 phone include 2 GB of RAM, a case that’s 9mm thick and a stainless steel scratchproof coating. 32GB of internal memory, SD card support and Bluetooth 4.0 are also on board. The design reminds me a bit of the Lumia 800/900 and that rectangular area at the bottom with the Windows Phone keys is an interesting aspect, although white may not be the right choice for it.

I wonder if this is a LTE phone with a front camera…. since modern WP8 device will most likely come with these functions. Also, in case you’re wondering, the real Windows Phone Apollo units will support dual core processors, so this device is pretty realistic. Get ready for some new Bob Freking concept phones in the following days!

About Thrystan
Samsung Galaxy Note 2 – Here’s How It Could Look + Specs   HTC One Z – Return of the Sliding Keyboard!