Just when you think Symbian is dead here comes Sanjaya Kanishka with a fresh Nokia concept that runs Symbian Donna. I’m talking about the Nokia N10, pictured below and offering some pretty modern hardware features. The latest real life Symbian releases were Anna and Belle and in the future we should get Carla and Donna. 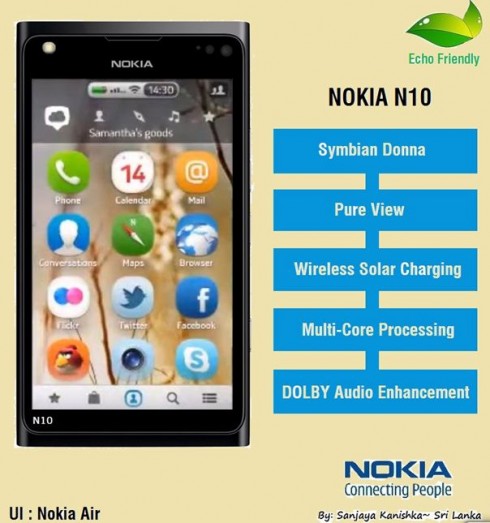 This Symbian Donna model packs a 4.3 inch LED backlit IPS TFT screen, with a 720 x 1280 pixel resolution, 342 ppi and PureMotion HD+ Clearblack screen. It also has Gorilla Glass 2 protection, 2 GB of RAM, 16 GB of storage, a hot swap microSD card slot and the CPU is a 2 GHz Cortex A15 processor + two Cortex M4 cores. This is a TI OMAP 5 Series chipset with a PowerVR G6630 GPU. At the back of the Nokia N10 we’ve got a 12 megapixel camera with Carl Zeiss sensor and PureView technology.

The camera comes with a Xenon flash, optical image stabilization, 1080p 60 fps video capture and there’s also a front 2 megapixel camera. Bluetooth 4.0, NFC, DLNA, LTE and micro HDMI are also here. Under the hood there’s a non removable Li-Ion 2700 mAh battery and Nokia N10 offers support for wireless charging and solar charging (via a special shell). The design is consistent with the line started by the Nokia N8 and N9, on the bulky side a bit, but overall this sounds like an interesting package.