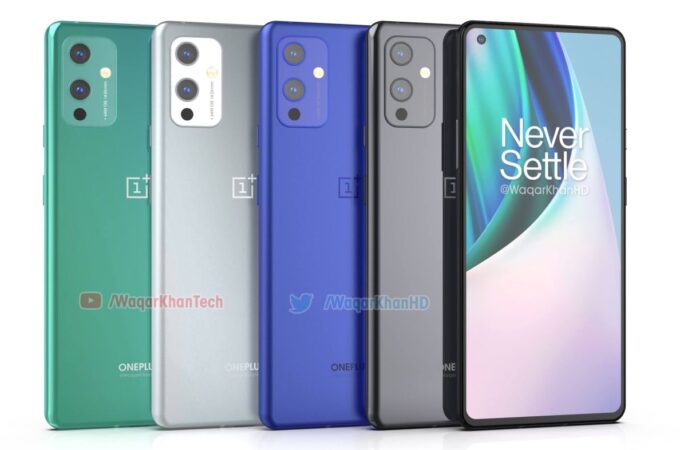 There’s been a flurry of OnePlus 9 leaks lately and yesterday the news was out: there are going to be 3 models in 2021. I’m talking about the OnePlus 9, OnePlus 9e and OnePlus 9 Pro. The OP9 was just leaked and rendered courtesy of designer Waqar Khan, who also has a video of the device below.

OnePlus 9 seems to build upon the previous release, OnePlus 8T. The device gets a flat screen with rather large bezels and a back side that feels like it’s covered with polycarbonate. The green version looks particularly well, but the blue hue is too intense. The renders stick to what the latest leaks have shown: a triple back camera with 2 big lenses and a smaller one below. We also have the typical mute/silent button and a pretty slim allure. The selfie camera is still in a punch hole at the top left side.

The main back camera is a 64 megapixel shooter, with optical image stabilization and we also have an ultrawide camera below, plus what appears to be a ToF, laser focus or LiDAR. There’s a Qualcomm Snapdragon 875 processor inside, plus 8 GB of RAM and 128 GB of storage. A 6.55 inch 120 Hz screen, a battery with 65W charging and stereo speakers should also be here. The main problem I have here is that I fail to see a selling point compared to the OnePlus 8T or a plurality of early 2021 flagships that will appear.

What do you think OnePlus needs to steal the show in 2021?

About Kelvin
Passionate about design, especially smartphones, gadgets and tablets. Blogging on this site since 2008 and discovering prototypes and trends before bigshot companies sometimes
Samsung Galaxy S21 Plus Rendered in Silver, Looking Great   Samsung Galaxy A32 5G Rendered by OnLeaks, Has a Massive Size