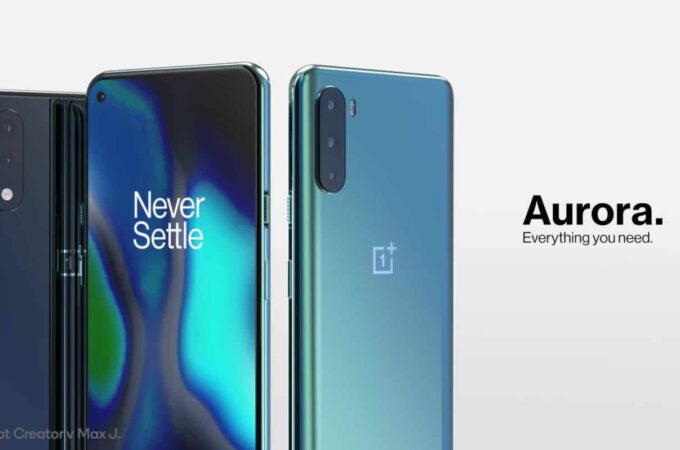 As OnePlus Nord conquers the headlines by being one of the most affordable 5G phones and a return to midrangers for OnePlus, rumors keep spreading about extra midrange phones. One of them is known as OnePlus Aurora and it’s supposed to have two versions, codenamed “Billie 1” and “Billie 2”.

Designer Concept Creator teamed up with Max J and turned the leak into a 3D render. Billie 1 and Billie 2 pertain to the OnePlus Nord series and their name is apparently derived from the artist Billie Eilish for some reason. The designers think that the newcomers will share some of the OnePlus Nord features, but at an even cheaper price tag. The OnePlus Aurora models will be made of glass and metal and they’ll have curved backs. They also have flat displays and they’re pretty similar, except for the camera and screen size.

The smaller OnePlus Aurora packs a dual back camera, while the bigger unit has a triple cam. These products could debut before the year is out, presumably together with the OnePlus 8T series. There’s also a rumor going around about the Snapdragon 690 CPU being inside. The design kind of reminds me of the OnePlus Nord, equally glossy and with a similar hue of the back side. The facade has narrow bezels and a camera cut into a punch hole.

Pricing this even lower than the OnePlus Nord means going into iPhone SE 2020 or Pixel 4a territory. You know what would be nice? The promise of 3 years of Android updates for these models, but tinkerers and modders will probably expand the lives of OnePlus phones indefinitely. Every once in a while we hear about the first, second or third OnePlus phone getting to run Android 9 or 10.

About Kelvin
Passionate about design, especially smartphones, gadgets and tablets. Blogging on this site since 2008 and discovering prototypes and trends before bigshot companies sometimes
iPhone 12 Flip Gets a Trailer, Obviously It’s a Foldable Clamshell   Xiaomi Mi 10 Ultra Official Renders and Poster Leaked