OnePlus Community Gets to Draw the Next Phone; Here are a Few Designs 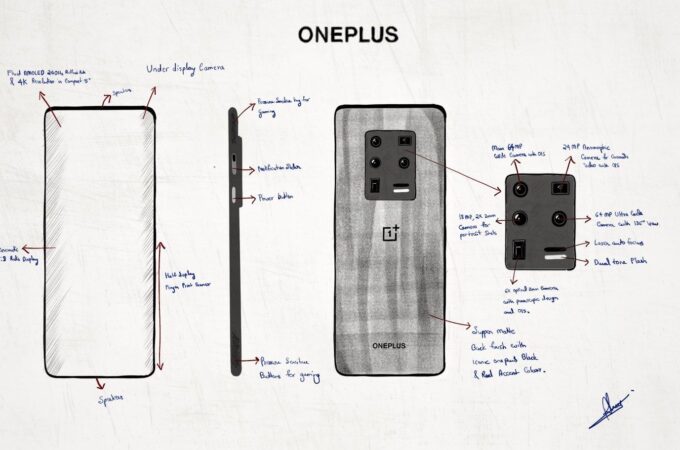 OnePlus has always been about its community and the unity between its fans. Now it has started an initiative that puts creative control in the hands of fans. The OnePlus community has been invited to draw the “OnePlus phone of the future”. The company claims that it has received plenty of submissions and posted three of them on Twitter.

The approach is obviously childish, but filled with imagination. So let’s see what the public had to say. The first concept is a dead ringer for the Galaxy S20 Ultra, albeit with even more sensors. People want an anamorphic camera, a 64 MP main camera with OIS, 64 MP ultrawide camera with 136 degree view and faster autofocus. At the same time they want a a Fluid AMOLED 240 Hz 4K screen in a crazy compact 5 inch display format. But that’s just one proposal.

The second phone is even more futurisitc, integrating a projector, a flashlight and three cameras. The projector is revealed after a sliding part moves out of the way. There’s also a folding stylus “for digital art”. There’s no need for a screen or UI, as the projector does it all.

Finally we get a more basic approach, a slab of glass and metal, with a camera hidden in the screen and no ports or holes. There’s a magnetic charge area at the bottom and well masked speakers. These have also been rumored for the iPhone 13 by the way.

Some people also mocked the whole concept hunt, saying they just want the $600 phones back. You can see more submissions here.

About Kelvin
Passionate about design, especially smartphones, gadgets and tablets. Blogging on this site since 2008 and discovering prototypes and trends before bigshot companies sometimes
Nokia 3310 2020 Edition Gets USB-C Port, Smarter Features   Apple Glasses Gets Detailed on Renders and Video by Hasan Kaymak