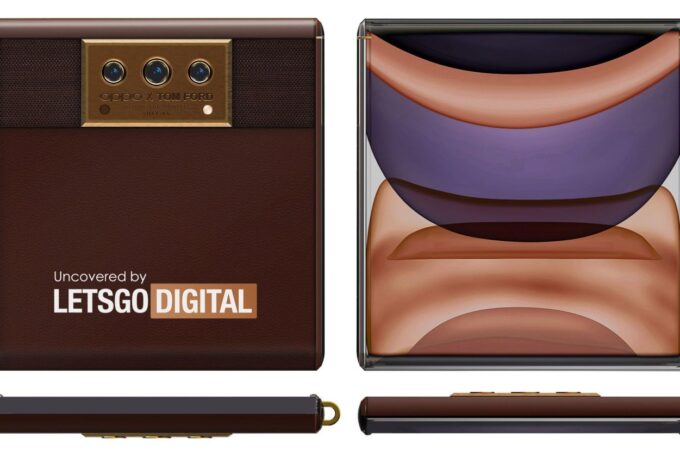 We’ve covered the Oppo X 2021 rollable phone ever since it was showcased and now we’re already getting spinoffs, it seems. Letsgodigital unveiled a version of the Oppo X envisioned to wear the label and style of Tom Ford, beloved American fashion designer. The result can be seen below.

Oppo X 2021 is a pull out display smartphone, unveiled at INNO Day 2020, that basically inaugurates the rollable smartphone segment. Oppo also has quite a few patents for smartphones with this design. What we’re seeing here is a bit different compared to the Oppo X 2021. This time we vet a vertical slider, with a square format once it’s closed. It also has a triple back camera with a horizontal orientation and a module that’s most likely coated in gold. The handset is a very compact slider, with a flexible, retractable display, which can be pulled in height.

This way the display area can grow by 80%. Both the top and bottom of the screen are beautifully rounded, for an extra touch of elegance. This is a compact form factor, that quickly turns into a much larger phone through the sliding part. The camera island is designed with a sort of wood grain structure. Below the camera you can see the inscription “Oppo X Tom Ford – Design for Concept Shakira”. Symmetry is a big deal here, as shown by the LED flash compensated with an extra dot on the left side.

On the sides of the device there are two golden tabs, that you can pull out which makes it easier to hang the phone on your neck, like a fashion item. The brown back side has a ribbed structure, which seems to be leather. Oppo has used leather before, on the Find X2 Pro for example, where you can find an orange vegan leather back. When you pull out this rollable phone, you create another back panel shown in gray in the images. It’s not very clear what its purpose is. It could be a second screen, which could make it possible to take selfies with the triple camera.

There’s also no visible front camera here. We could be dealing with an under display camera, but I doubt it. Why Tom Ford? He’s a reputed and well known American fashion designer, who worked with Italian fashion brand Gucci. In 2004 he left the group and started off on his own. From 2007 Ford set up a menswear line, expanded in 2010 with a women’s collection. This is supposed to mirror the collab between Samsung and fashion outfit Thom Brown for the Z Flip.

About Kelvin
Passionate about design, especially smartphones, gadgets and tablets. Blogging on this site since 2008 and discovering prototypes and trends before bigshot companies sometimes
Samsung Galaxy A82 5G Rendered and Specced With Unusual Camera Design   Apple Car Gets a Design From Concept Creator, Letsgodigital (Video)