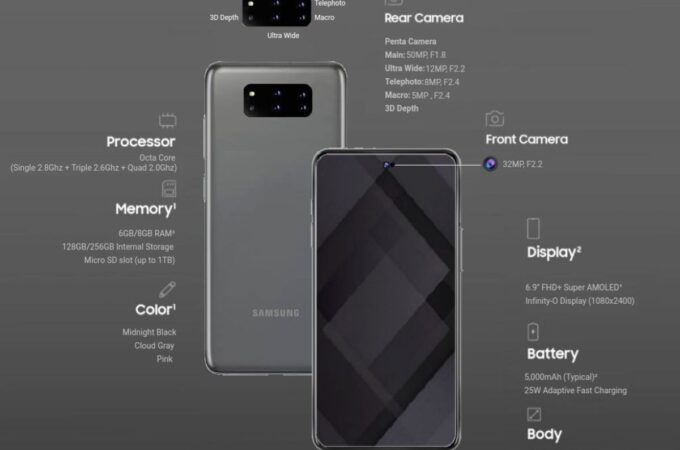 We were pretty puzzled when we saw the Xiaomi Mi 11 Pro leaking out with a rectangular horizontal back camera, but it turns out that a few more handsets may sport such a design. Samsung Galaxy A82 5G has just been rendered by a designer called Oguz Ozturk, who mailed his creation to us. Let’s check it out.

First of all, this is a huge device, with a 6.9 inch diagonal size and also a rather large 5000 mAh battery, although 6000 mAh wouldn’t have hurt. The odd thing here is the camera design, that feels a bit like the older Samsung approach or maybe the LG G one. The specs aren’t half bad, especially since we have a Penta camera at the back. It includes a 50 megapixel main camera, an ultrawide 12 MP shooter and telephoto 8 MP camera. There’s also a 5 MP Macro shooter, probably the one from Galaxy A51/A71, as well as a 3D Depth sensor.

Upfront we find the already classical 32 MP selfie camera. The 6.9 inch screen is a Super AMOLED with Full HD+ resolution, curiously bigger than the 6.8 inch S21 Ultra. There’s an octa core CPU inside, probably a Snapdragon, since it’s a higher end Galaxy A, but an Exynos 1080 is also not out of the picture. 6 GB or 8 GB of RAM are here, plus a fingerprint scanner embedded in the screen. Galaxy A82 5G comes in midnight black, cloud gray or pink and it most likely packs a plastic and metal body, sans any weird pattern at the back, which we usually see on the Galaxy A models.

Some have triangular patterns, others lines and dots. I find the bezels to be a bit big here and honestly, seeing how the Galaxy A80 had the revolutionary slide up camera, there were some expectations we were going to see a weird camera here. Instead Samsung seems to play it safe. Measurements are actually OK for this diagonal size: 8.8 mm in thickness and 215 grams in weight.

About Kelvin
Passionate about design, especially smartphones, gadgets and tablets. Blogging on this site since 2008 and discovering prototypes and trends before bigshot companies sometimes
5 Reasons You Need a VPN for Your Android Phone   Oppo X Tom Ford is a Stylish Rollable Smartphone