Since the Samsung Ativ S smartphone was basically a Galaxy S3 with Windows Phone 8, why not have an alternative for the galaxy Mega? The Samsung Ativ Fusion concept by Gpat could be considered such a device, especially since it delivers some pretty impressive specs. 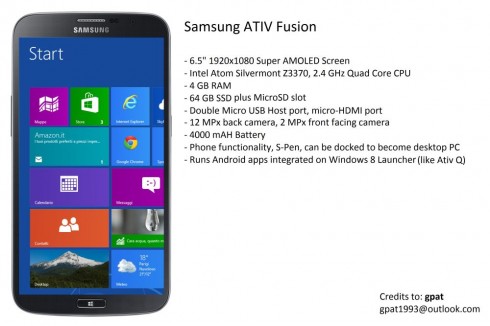 It could actually be the first successful Windows phablet on the market. What we’re dealing with here is a 6.5 inch Super AMOLED 1920 x 1080 device, with Intel Atom Silvermont Z3370 2.4 GHz quad core processor, 4 GB of RAM and a 64 GB SSD, plus a microSD card slot. There’s a double micro USB Host port and micro HDMI port on board.

At the back we’ve got a 12 megapixel camera and upfront there’s a 2 MP shooter. Inside the handset we find a 4000 mAh battery and there’s even an S Pen in the mix and the option to dock the device and turn it into a desktop PC. This model doesn’t seem to be running Windows Phone 8, instead of it runs Android apps integrated in a Windows 8 launcher somehow… Pretty cool right? Also, the design fits the latest evolution of the Galaxy series.