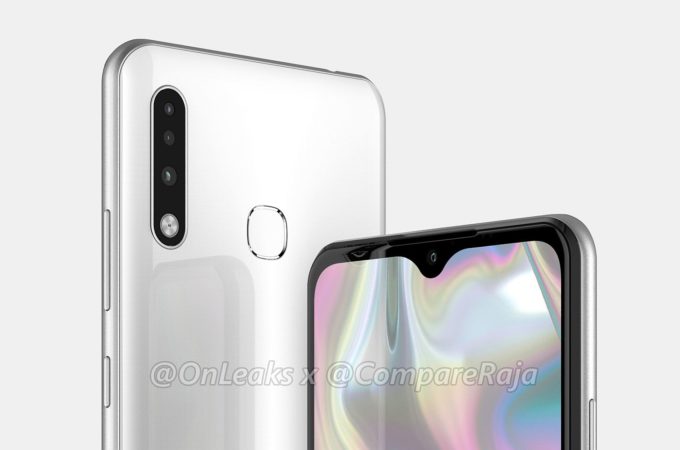 Samsung keeps diversifying its lineup of Galaxy A models, so aside from the Galaxy A70, A70s and A71, there’s also a Galaxy A70e. Compareraja and @OnLeaks are on the case, having just leaked 5K renders of the device. They’re definitely not as sexy as the A71 or A70s even.

For starters, the device is totally made of plastic, it’s quite wide and has huge bezels. The device packs a 6.1 inch flat display and it also brings a waterdrop notch for the front camera. There’s triple back camera here, plus a fingerprint sensor also at the rear. We see an audio jack alive and well at the top and we even have further sacrifices: a microUSB port at the bottom and a waistline of 9.35 mm. Samsung Galaxy A70e doesn’t have clearly detailed specs, but I guess that 4 or 6 GB RAM are probably here.

I expect a Snapdragon 6xx CPU inside, maybe the Snapdragon 675 of the Galaxy A70s. The triple back camera probably downgrades the 64 MP shooter of the A70s to a 48 MP shooter, if not less. There’s also an ultra wide camera here, plus a 5 MP depth shooter most likely. I have a feeling that this device will also be available as a Galaxy M model, under a name like Galaxy M21 or something like that. It’s very likely that the phone will come to India first.