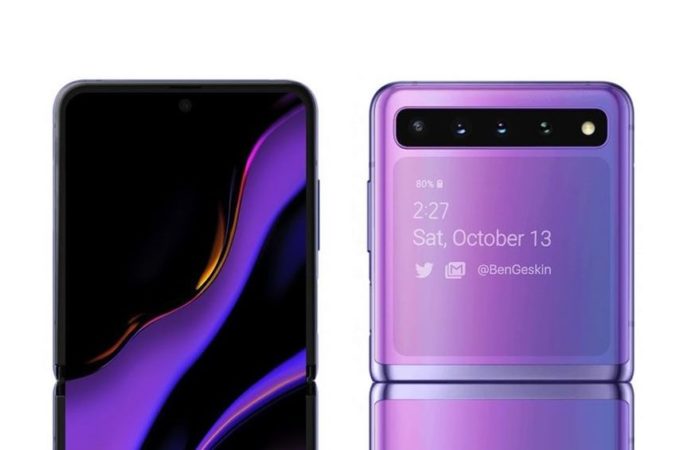 The other day I heard a person complain that we’re already bombarded with Galaxy S30 news and there’s nothing sacred about phone launches anymore. The Galaxy S20 held zero surprises when it debuted, because it had totally leaked. Now we already catch a glimpse at the Samsung Galaxy Z Flip 2, even though the Flip 1 was just launched.

It’s the creation of prolific designer Ben Geskin, who envisions a major camera upgrade and also an external screen upgrade. He rendered the device in purple, or better said mauve, with a quad camera setup and pretty much the same hinge. I feel that the hinge sides are a bit smaller and the hinge itself looks like rouged up lips, which fits the feminine profile of the phone. Here are the specs made public by Ben Geskin:

I love how discrete the external screen has become and also expanded. It’s no longer a 1 incher, but rather a 4 incher, which seems like monochrome or some other minimal approach. The specs feel like the ones of a Galaxy S20+, that folds down the middle. I feel that a stylus would also be nice to have here. I’m not sure how you can cram so many cameras into the top side and not make it fall over with weight…

About Kelvin
Passionate about design, especially smartphones, gadgets and tablets. Blogging on this site since 2008 and discovering prototypes and trends before bigshot companies sometimes
Samsung Galaxy A70e Leaks in Quality 5K Renders from @OnLeaks   First Google Pixel 5 XL Render is Here and It’s Not Pretty