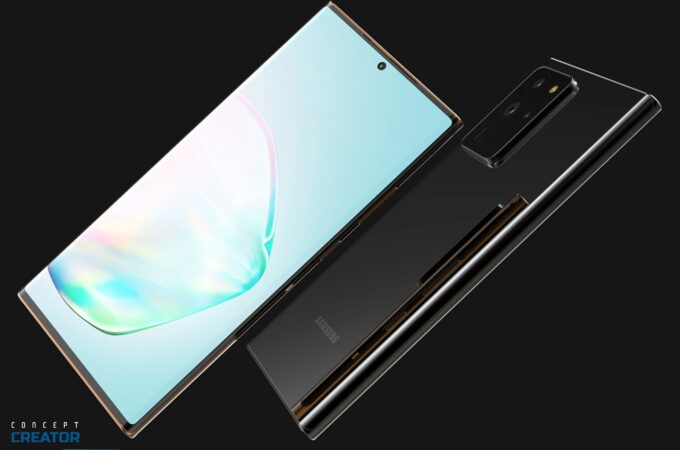 The pairing between Concept Creator and Letsgodigital is happening again, this time for the sake of a nifty new Samsung Galaxy Note 20 Ultra concept. It’s not like we haven’t seen the device a bunch of times before and even now a month and 4 days ahead of its launch, we’re not sure if it’s going to end up as the Note 20+ or Note 20 Ultra. Whatever the name is, we’ve got the renders covered below.

I’ll remind you that Samsung has scheduled an online only event on August 5th, Wednesday, an Unpacked event that will bring us the Note 20 series and Galaxy Fold 2. AS shown in the brand new set of renders from Concept Creator, the Note 20 Ultra has a very large set of lenses at the back, including a square periscopic one for zoom. Don’t get too excited, since the sources have only talked about 50X zoom tops, leaving the 100X record to the Galaxy S20 Ultra and Huawei P40 Pro+.

The main sensor will be a Samsung ISOCELL Bright HM1 with a 108 megapixel resolution, pretty much the same one as the Galaxy S20 Ultra one. We should also get a new laser autofocus system, that replaces the ToF camera we had before. It will matter a lot, because the S20 Ultra had autofocus problems, particularly in closeup situations. The 48 megapixel zoom camera will be replaced by a 13 MP shooter with better imaging features. Android 11 and One UI 2.5 are also mentioned by the source, but without too much emphasis on details.

We’ve learned recently that the Snapdragon 865+ processor is once again a possibility, after some rumors said it may have been canned. Samsung is also said to have integrated a flatter display this time, or better said less curved and offering a 120 Hz refresh rate. It makes it easier to store the S Pen and also integrate a large battery. Expect a 6.3 inch Full HD+ screen on the Note 10 and 6.9 inch one on the Note 20 Ultra.

5G is also here, plus a 4500 mAh battery on the Note 20 Ultra, as well as stereo speakers. 45W charging is also available, but only a 25W charger will be bundled. Most of the features shown here will probably also be seen on the final device, actually 90% of them, or more. The new copper hue is definitely interesting, but it feels a bit too serious, compared to the predecessor, which was a device tailor made for content creators, vloggers and youngsters.

And still, no info on the new stylus functions…

About Kelvin
Passionate about design, especially smartphones, gadgets and tablets. Blogging on this site since 2008 and discovering prototypes and trends before bigshot companies sometimes
Huawei P50 Pro 5G (2021) Concept Ticks Some of the Boxes We Want   Xiaomi Mi Flip Twist is a Foldable Phone With a Twist… able Camera