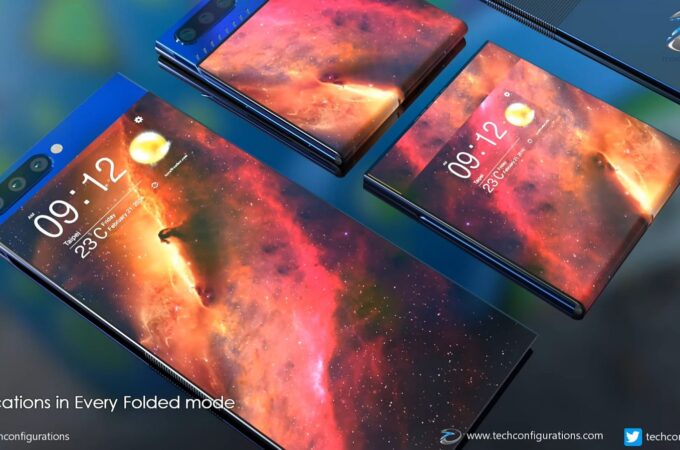 Things are getting boring already… Xiaomi has leaked about a dozen if not more patents related to a foldable phone and they’ve yet to deliver. The last solid leak came in January 2019, when a Xiaomi official appeared on camera with a prototype. Well, concepts still pop up for that mythical Xiaomi foldable, like the one below.

The creation of Techconfigurations, this Xiaomi Mi Flip Twist actually combines a few courageous design ideas into one foldable phone. First of all, it has a twistable camera at the top, plus a foldable body, which is closer to a clamshell approach rather than a Galaxy Fold design. As you probably know, if you’ve read my posts so far, I’m not a fan of moving parts. The more you have, the more you can break on a phone. The top side of the Xiaomi phone hosts a “flagship camera module”, with a 108 MP main sensor, 12 MP telephoto camera and 13 MP ultrawide shooter.

It can rotate and make the primary camera a selfie camera. Interestingly, the rotating part is not motorized, so I guess it’s mechanical. The device has a 6.8 inch screen, of the AMOLED variety, with LTPO tech and 120 Hz refresh rate. It becomes a clamshell, as it folds the bottom part of the screen behind and attaches it right next to the camera. This leaves a lot of glass exposed, which may cause scratches, so we definitely need UTG protection here, or maybe even better.

Honestly, the device itself isn’t bad, but the rotating camera thing is a big no no. We also seem to be getting a secondary screen on the other side of the camera module, that completes the screen. Also, the Xiaomi Mi Flip has a body that’s waaaay too slim to not be incredibly fragile. The color variety is pretty nice, although I doubt Xiaomi would produce so many versions of a device with a nightmarish yield in factories. Chalk this one under “wet dreams”.

About Kelvin
Passionate about design, especially smartphones, gadgets and tablets. Blogging on this site since 2008 and discovering prototypes and trends before bigshot companies sometimes
Samsung Galaxy Note 20 Ultra Gets Concept Creator Treatment Again (Video)   Sony Playstation 5 Gets a Redesign Courtesy of Concept Creator