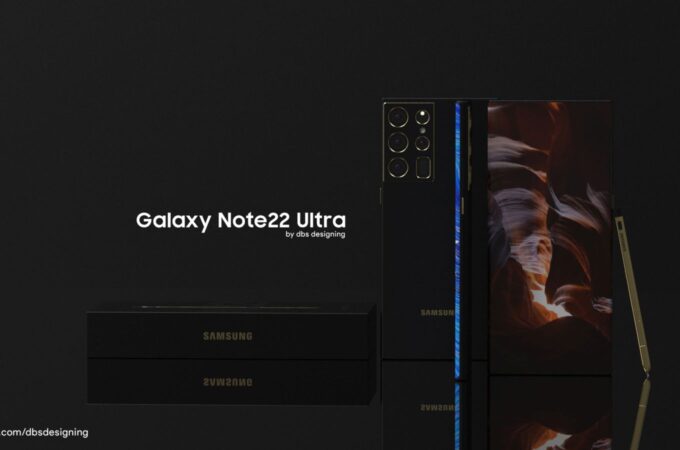 We won’t be getting a new Galaxy Note this year, so no Note 21, but we’re all about dreaming about the next big thing. That’s why the Samsung Galaxy Note 22 Ultra concept shown below is such a big deal for us. Rendered by DBS Designing Team, the device has all the bells and whistles that will steal your wallet.

I’m actually curious what the angle will be this time. Note 10 was all about AR and vlogging, Note 20 was all about the new stylus and new UI. Note 22 may well be about gaming, especially if the AMD GPU comes up with ray tracing. What’s certain is that we’ll see the selfie camera hidden below the screen. There’s a Penta back camera here with a periscope shooter included.

We get small boxes, according to the video and no charger, at least not a wired one. The large screen is immersive and it continues on the sides, all the way to the back. So much so that I think the physical buttons risk becoming virtual ones, but they don’t, being rather slim instead. The Galaxy Note 22 Ultra is rather slim and angular, getting rid of curves and feeling more professional, more business oriented.

The designer didn’t unveil specs, but we can easily speculate that there’s an Exynos 2200 with AMD GPU here, 12 or 16 GB of RAM, plus a 144 Hz 6.8 inch AMOLED panel. The optical zoom may become variable, like the Xperia 1 III one and also the one rumored for Huawei P50 Pro. That’s the big trend right now, as well as aspherical lenses, freeform lenses for ultrawide cameras and liquid lenses even.

We can’t have all of them though. Strong stereo speakers are expected, plus a stylus with even more features, lower latency and perhaps its own battery and camera, although no trace of it here.

About Kelvin
Passionate about design, especially smartphones, gadgets and tablets. Blogging on this site since 2008 and discovering prototypes and trends before bigshot companies sometimes
Samsung Galaxy Note 21 Ultra Has a Second Screen At the Back   Motorola Edge 20 High Resolution Renders Leaked (Specs Too)