Looking back in time, it’s clear that people loved the design of the Galaxy S II, actually so much that Samsung felt it and integrated some of the design lines within Galaxy Note 3. It also included some elements from the first Note, if you ask me. But what about the players? 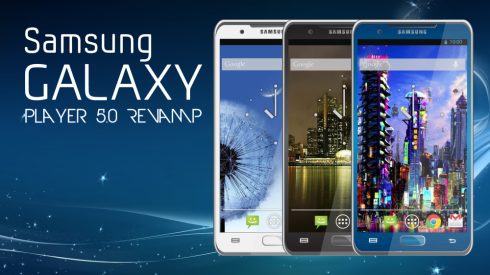 Sting-Ray Vintral imagined a new design for the Samsung Galaxy Player, now shown in a version 5.0 above. The device competes with the iPod Touch and brings forth a 5 inch screen, Android 4.3 and a 1.2 GHz processor. The device is meant for media consumption, so it’s totally not a handset. It comes with a 5 megapixel camera with a flash and a 2 megapixel front shooter.

Why was I talking about the Galaxy S II in the intro? Well, because this model totally reminds me of that classic design, now with a thinner bezel, as shown here. By the way, nice colourful wallpaper on the rightmost version of the Galaxy Player 5.0. What do you think?