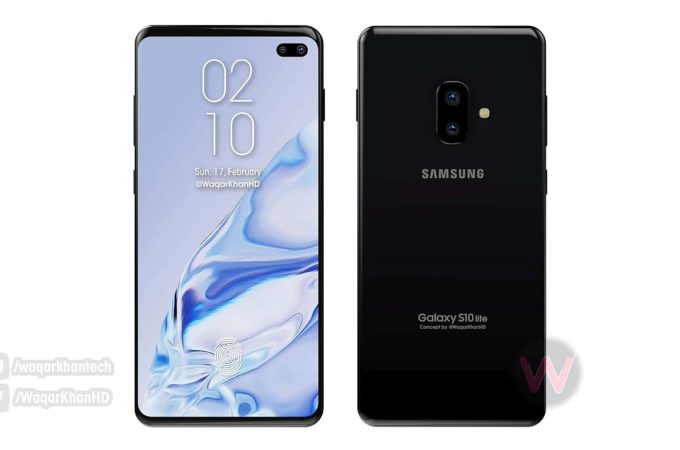 Samsung Galaxy S10 Lite was the topic of rumors as early as February 2019. It didn’t come true, as instead we got the Galaxy S10e. In the meantime, in the fall there were speculations about a Galaxy Note 10e. That also didn’t pan out and was replaced once more with Galaxy S10 Lite rumors. Faced with all of these we’re a bit baffled, but with the Galaxy S10 Lite leaking a lot lately, we sense a bit of a pattern here.

Helping us navigate the confusion we’ve got designer Waqar Khan, who created a Samsung Galaxy S10 Lite concept, based on all the leaks and rumors. The device draws inspiration from the Galaxy S10 series, but also channels a bit of the Galaxy K identity, if you look at the back closely. Surprisingly enough, it has a dual selfie camera cut in the screen, like the Galaxy S10+. At the same time, it keeps a regular looking dual back camera, with vertical orientation.

It’s most likely made of glass and metal and looks pretty fancy from the front, while the back is a bit… modest. Overall, the format has become generic, as the rectangular machine with big screen and cutouts is a new norm. Some companies have tried to put the selfie camera in a mechanized pop up mechanism, while others even tried to put the camera inside the screen, or in the chin, like Xiaomi did.

The future will definitely mean hiding the selfie camera better, but we’re not there yet… By the way, the Galaxy S10 Lite leaks show pretty solid specs, like 8 GB of RAM, a Snapdragon 855 CPU and 128 GB of storage. The resolution is yet unknown, but it could be anywhere between 5.8 inches and 6.3 inches.