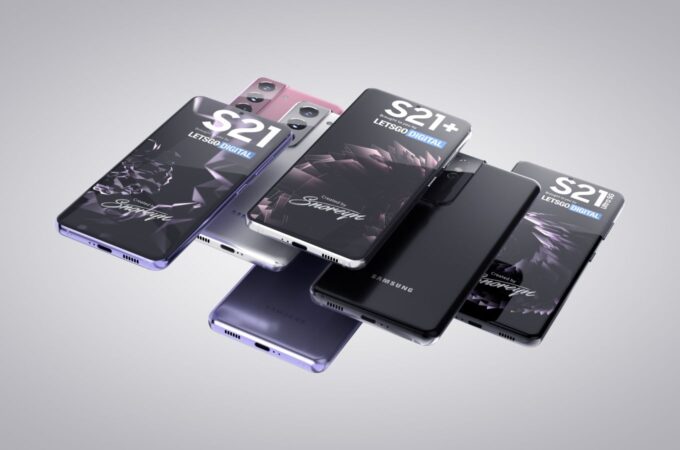 We teased a new Samsung Galaxy S21 Ultra design a few days ago and here we are at last with the freshest batch of renders from Snoreyn and Letsgodigital. The camera wrapped around the corner of the smartphone is still here and by the way we got more than just the S21 Ultra: the entire S21 series has been rendered this time. We’ll cover each model at a time though.

Starting with the Samsung Galaxy S21 Ultra, we’re dealing with S20 Ultra successor, that sports even narrower bezels and seems to cut down on the camera thickness. The images that Letsgodigital published and designer Snoreyn rendered are inspired by the leaks that Steve Hemmerstoffer aka @OnLeaks revealed a while ago via social media platform Voice. Galaxy S21 Ultra is going to sport a renewed camera system, that seems to include 5 sensors. It has a new housing, that takes up less space than it did on the S20 Ultra.

The extra sensor (compared to previous leaks) is now placed above the flash. The SIM compartment has been moved to the bottom. Samsung Galaxy S21 Ultra is the real flagship of the triplet, opting for a 6.8 inch display this time in lieu of the 6.9 inch one on the S20 Ultra. Supposedly we are expected to get an alternative to the Ceramic Shield on the iPhone 12 Pro in order to improve drop protection. The central placed selfie camera punch hole will be kept, it seems, as Samsung is not ready for an under display camera.

A 40 megapixel front camera is also likely. As far as the back camera goes, there are two 10 megapixel sensors there, one with 10x optical zoom and one with 3x. Also, the main sensor is an 108 MP shooter with a third gen Samsung HMX sensor. Then there’s the 12 MP ultrawide camera and a new laser focus sensor. However, there’s still talk of a new ISOCELL Vizion 3D ToF sensor made by Samsung itself. It should be good enough to rival the LiDAR from Apple.

The device is shown in silver and black and it’s supposed to come with a Snapdragon 888 or Exynos 2100 CPU. Expect 12 GB of RAM and 256 GB of storage. By the way, the hues are called Phantom Black and Phantom Silver here. A special new hue inspired by Mystic Bronze will appear later on. And this is just the first of 3 pieces we’ll publish on the S21 renders. What do you think of this new concept?

About Kelvin
Passionate about design, especially smartphones, gadgets and tablets. Blogging on this site since 2008 and discovering prototypes and trends before bigshot companies sometimes
Top 7 Criteria for E-Commerce Web Hosting This 2020   Xiaomi Mi 11 Rendered in Detail by Designer Ben Geskin