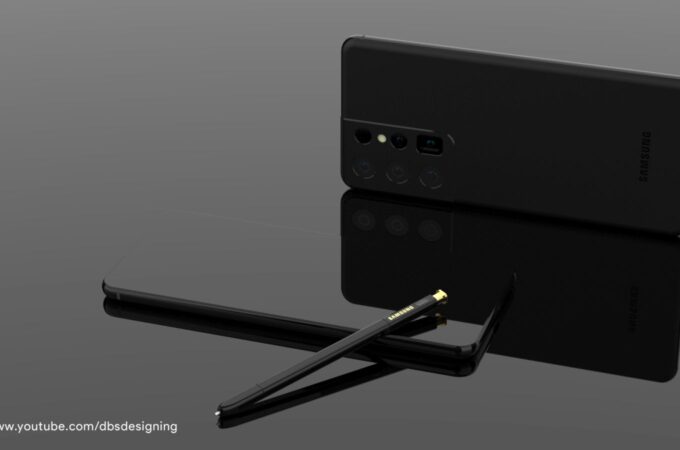 As there’s no Galaxy Note 21 scheduled for this year, having been postponed till 2022, all sights are already set on the Galaxy S22. That’s why we started seeing so many concepts for the Samsung Galaxy S22 Ultra 5G. The latest one comes from DBS Designing and features a brand new hexa camera.

The device lacks a punch hole, instead placing the selfie camera below the screen panel. The device remains S-Pen compatible and maybe this time we’ll also get one bundled. In this case we get a golden-green one. From what I can see the flagship keeps the general format of the predecessor, but with a larger camera module. Lenses are bigger and the periscope telephoto camera has greatly increased in size. There are some lovely new green, gold or red accents applied to the metal around the camera module.

I can’t expect to see a huge innovation for the screen, maybe even more reduced bezels, while the refresh rate may stick to 120 Hz and be adaptive once again. The under display camera risks making the S22 Ultra beefier, that’s something I fear. The renders make the flagship appear reasonably slim though. The panel upfront looks totally immersive and I can’t even spot bezels now. A new Exynos CPU should be inside, maybe an Exynos 3100, together with 16 GB of RAM or even 18 GB like gaming phones.

Camera zoom may jump to 120X and since the current trends involve a Liquid Lens and freeform lens, we may also see that being used. Actually a hexa camera doesn’t make sense, since Liquid Lens cameras can actually replace 3 cameras: telephoto, Macro and even ultrawide.

About Kelvin
Passionate about design, especially smartphones, gadgets and tablets. Blogging on this site since 2008 and discovering prototypes and trends before bigshot companies sometimes
Xiaomi Mi Mix 4 is Here in Brand New Images, With a Very Clean Design   Samsung Galaxy S21 FE First Look Is Here, Thanks to OnLeaks Renders