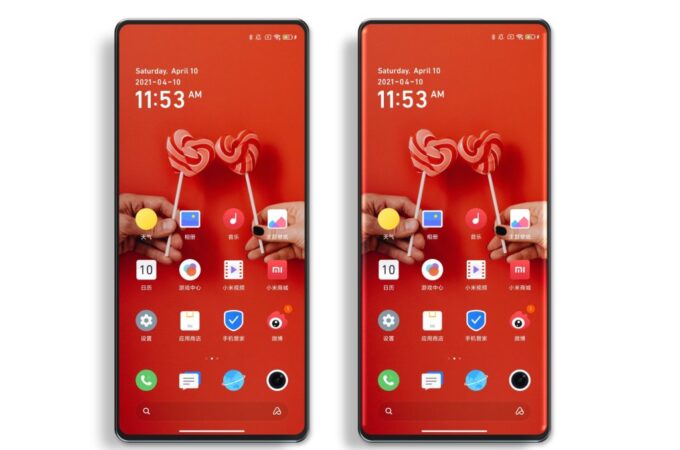 I feel that for some people Xiaomi’s first foldable phone, the Mi Mix Fold was actually a bit underwhelming. Why? Because it rather adhered to familiar formats instead of properly innovating. That’s why we’re turning our eyes and ears towards the next great reveal, the Xiaomi Mi Mix 4. Its latest renders have just hit the interwebs and they’re pretty clean.

It’s banking heavily on the idea of an edge to edge screen, sans notches, punch holes or cutouts. We also get to see both curved and flat versions of its screen, made even more immersive thanks to the gesture-based navigation. These renders are coming from Ice Universe, a prolific leakster with a good track record. The general format of the smartphone is a bit more rigid and angular than expected, with very gentle curves at the corners. It’s also rather narrow and long, closer to a 21:9 phone that Motorola or Sony would deliver.

Another render of the Mi Mix 4 comes from another solid leakster, Digital Chat Station, although he didn’ exactly unveil the name of the product. This version clearly has an under display camera and a quad curved screen. Xiaomi is said to have already achieved a third gen under screen camera technology as early as August 2020. The secret is a special type of pixel arrangement, with a redesigned pixel drive circuit, which improves light transmissions rate of the front camera in that section of the design.

We expect a large scale mass production of the under screen camera in the second half of the year. The problem is that both Oppo and ZTE have tried their hand at under display cameras and pretty much failed at it. Can Xiaomi actually crack it?

Sources say that we may in fact not even see a selfie camera under the screen of the Mi Mix 4, which may resort to a second screen at the back in order to let you take selfies with the main cam. That’s not unheard of, obviously.

About Kelvin
Passionate about design, especially smartphones, gadgets and tablets. Blogging on this site since 2008 and discovering prototypes and trends before bigshot companies sometimes
5 Amazing Reasons Why You Need a Phone Case   Samsung Galaxy S22 Ultra 5G Goes HEXA Camera, Gets Under Display Selfie Cam