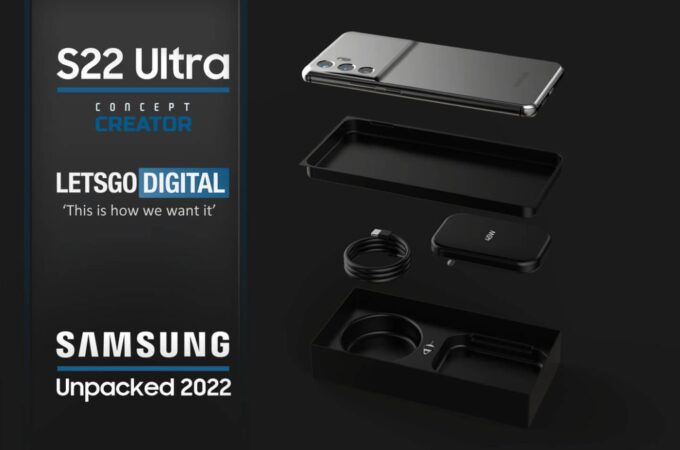 Since Samsung is pretty much done with flagship launches for 2021, it’s time to turn our attention to 2022. That’s when the Galaxy S22 series is coming out and it should pop up in January if the previous two flagships are any indication. We’ve heard some bits and pieces of rumors regarding diagonals, batteries, even cameras, but it’s Letsgodigital that’s putting everything together.

Designer Concept Creator has created for them a new concept, the Samsung Galaxy S22 Ultra, that comes with a microSD card slot and audio jack. It has an under display camera and also a new and improved packaging. Even the charger makes a triumphant return. The design makes the back camera even more discrete and integrated into the back side, but it may also make the device bulkier. There’s definitely room for a second screen at the back, although this would have resembled the Xiaomi Mi 11 Ultra too much.

The device is paired with a 45W charger and also gives up on the selfie camera punch hole, opting instead for an under display back camera. The back camera is actually sleek compared to the rest of the back side, but somehow it feels like you’ve added a Mophie battery to that area and I expected lenses to cover more space and… be more. I also can’t seem to spot a periscope telephoto camera, so maybe there’s a new Liquid Lens instead.

Variable aperture is also said to make a return, after being present on the Galaxy S9 and S10. There’s also talk about Samsung working with camera maker Olympus, in order to either implement a 200 megapixel camera or maybe a new generation of 108 MP shooter. I feel that this Galaxy S22 Ultra has a lot of Apple identity infused into it somehow, especially when seen from the back and profile. With flatter edges it would definitely be closer to the iPhones.

I’m not going to talk about specs, but rumors have mentioned a 6.81 inch LTPO screen and an Exynos CPU with AMD GPU capable of mobile ray tracing, or something close to it.

About Kelvin
Passionate about design, especially smartphones, gadgets and tablets. Blogging on this site since 2008 and discovering prototypes and trends before bigshot companies sometimes
How Technology Helped Casinos Survive During The Pandemic   9 Apps That Will Make Your Time at College a Piece of Cake