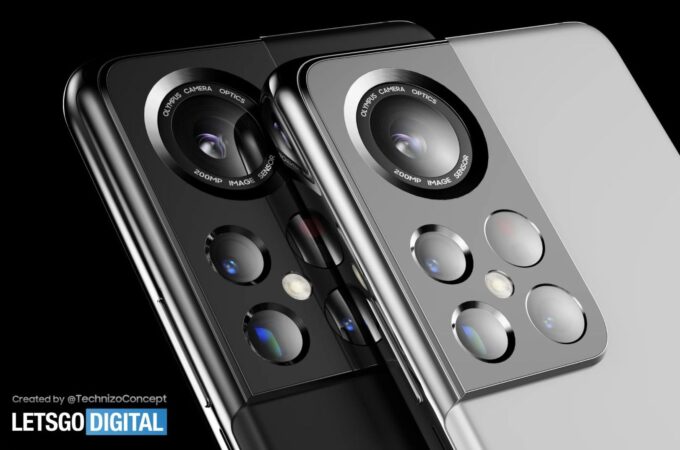 Samsung Galaxy S22 Ultra should debut in January 2022, but till then we have still a mountain of leaks and concepts to climb. The latest comes from our favourite source, Letsgodigital (via designer Technizo Concept) and once again brings back the idea of an Olympus camera.

The Samsung Galaxy S22 Ultra is rendered here with an S-Pen stylus next to it and a new pair of headphones. It seems to keep the punch hole in the top part of the screen, not opting for an under display selfie camera, even though rumors have associated that with the Galaxy Z Fold 3. The new 2022 Samsung flagship is going to feature a LTPO screen with adaptive refresh rate, just like the S21 Ultra. It should allow it to use less power and go down as low as 1 Hz, from 120 Hz.

The Ultra will have a glass back panel yet again, but the two cheaper S22 models will adopt plastic. The S-Pen compatibility this time also brings Wacom technology in the mix. Two stylus pens have been introduced for the S21 Ultra and newer ones will come with the S22 Ultra. Gaming will also be a focus, as the device now sports a built in cooling fan. As far as the camera goes, Olympus will get involved, just as Leica did with Huawei, Zeiss with Sony and Vivo, plus Hasselblad with OnePlus.

We’ll get continuous optical zoom according to sources like Ice Universe and the device will use a singular optical zoom camera, not two telephoto cameras like the Huaweis and S21 Ultra. Sony has a similar feature right now on the Xperia 1 III, even though they call if variable focal length. In Body Image Stabilization may also appear, inspired by the professional cameras. Some sources are even talking about Sensor Shift tech borrowed from Apple’s iPhone 12 Pro Max.

A 200 MP camera has been placed on this concept and an Exynos SoC with AMD GPU for mobile ray tracing for the first time. Expect Android 12 with One UI 4.0 on top and more innovations detailed in the video below.

About Kelvin
Passionate about design, especially smartphones, gadgets and tablets. Blogging on this site since 2008 and discovering prototypes and trends before bigshot companies sometimes
Looking for an Antivirus Software? Here’s How to Choose One   OnePlus Nord 2 Renders Are Here and Show Clear OnePlus 9 Relation