Samsung Galaxy S4 by Bob Freking is Back With More Detailed Pictures!

Samsung Galaxy S4 has been a lot in the rumors of the past days and early in November we showed you a pretty interesting concept of the device made by Bob Freking. At that time all we had was a video and a screenshot, but now Bob sent us three detailed pictures of the 2013 Galaxy S flagship. 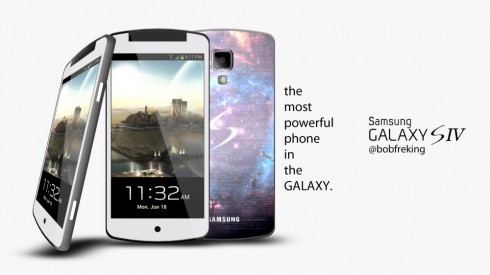 You should know that this device was created using the Concept Phones readers suggestions and opinions, from a special article we wrote a while back. This Samsung Galaxy S4 has  among the featuresa 13 megapixel camera at the back with Full HD capture, plus a 3 megapixel camera at the front, also with 1080p capture. The phone measures just 8 mm in thickness and its case is made of polycarbonate, according to Bob Freking. Just like speculations say, we’re got a 5 inch Super AMOLED FHD+ display with a resolution of 1920 x 1080 pixels.

The OS of choice is Android 4.2 Jelly Bean with a new version of the TouchWiz Nature UX included, as well as updates to the S Voice and Google Now functions. We also get 2 GB of RAM, a 3500 mAh battery, which is very generous by the way and the famous quad core Exynos 5450 2.5 GHz processor, that I doubt will be ready by the time the real Galaxy S4 comes out. The design of the phone has a solid feel to it and feels more resilient than today’s plasticky handsets. What do you think?